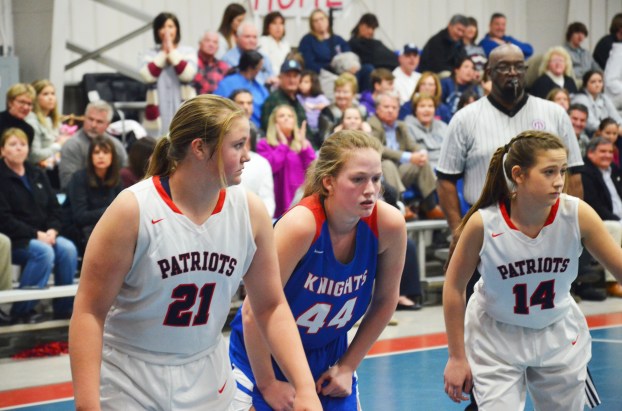 Tanna Singleton (21) waits to box out a Macon East player on Thursday night.

It took double overtime, but the Pike Liberal Arts Lady Patriots knocked off Macon East 55-53 on Thursday night in Troy.

The win for the Patriots improved their record on the season to 12-14.

“One of the big differences is that we played all four quarters and then some,” said head coach Torie Peters. “They didn’t give up. The girls have a lot of grit and want-to and that showed tonight.”

Another key factor for the Patriots, according to Peters, was their ability to play as a team throughout the contest.

“I fully credit that to being the difference in the game,” Peters said. “I feel like it’s huge going into postseason play. I think it was a big win. This late into the season, it’s a great win to carry on with.”

Shelby Renfroe finished with a team-high 26 points for the Patriots. She hit big shots down the stretch for the Patriots, none bigger than the shot she made at the end of the first overtime.

After the game transitioned into overtime, the Patriots and Senators remained tight. The Senators held a three-point lead with under a minute remaining. With time dwindling below 10 seconds, Renfroe made a three-point shot while being hit to tie the game. Renfroe was fouled and she went to the line to give the Patriots a lead. Her shot missed and the game went into double overtime.

“She comes in clutch a lot,” Peters said. “She is a great player and she works hard. She gives us everything she’s got. Tonight that was big. It takes all five on the court. Shelby had a great night, but we couldn’t have done it without all five players.”

The Lady Patriots trailed for much of regulation. They lead 13-12 in the second quarter before going into halftime trailing by one at 17-16. Renfroe scored the Patriots’ first eight points in the quarter.

They briefly held a 21-19 lead in quarter number three before heading into the fourth quarter trailing by three.

Tiffany Johnson scored a three-pointer to give the Patriots a three-point lead with under a minute remaining. The lead was short lived, the Senators scored on a three-pointer of their own to send the game into overtime.

After Renfroe’s shot forced a second overtime, the Patriots outscored the Senators 4-2 to claim the win.

“It’s a big deal having so many players scoring,” Peters said. “It’s been a big factor for us. We are continuing to grow in that area.”

The Patriot boys were also in action on Thursday night. They knocked off Macon East 58-43.

Jade Sikes led the way for the Patriots with 17 points. Drew Nelson finished with 16 points and Javon Christian also finished in double figures with 15 points.

The patriots will close out the regular season this evening when they host Lee Scott.