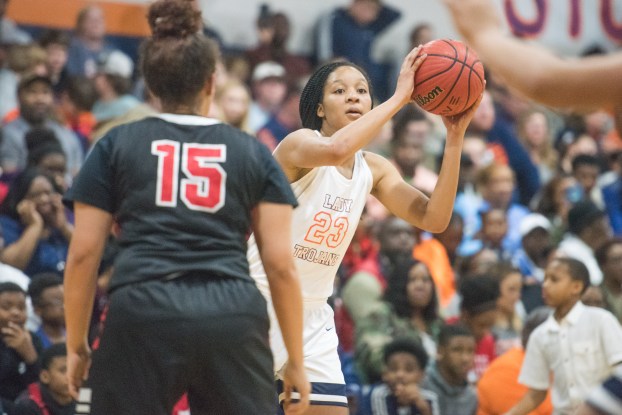 Messenger Photo/ Charles Henderson senior Maori Davenport looks for an open teammate in a game against Carroll on Friday night.

Trojan senior Maori Davenport made her triumphant return to Charles Henderson in front of local and national media and a packed gymnasium on Friday night in Troy.

The Trojans welcomed Davenport back with a dominating 72-17 win over Carroll.

Davenport played in just four games, before being ruled ineligible in late November after the received a check from USA Basketball for her time in the FIBA Americus 18U Tournament in Mexico City.

By night’s end, Davenport finished with 25 points. When asked how she thought she played on Friday night, Davenport answered with a smile.

Head coach Dyneshia Jones welcomed back Davenport on Friday night and she got a front row look at just how dangerous her team can be down the stretch.

“Did you see it?” Jones asked. “That’s what what we missed. We don’t want to brag about Charles Henderson, but with Maori back, if we play Charles Henderson basketball, then we have a good chance to make it state again.”

Davenport brought the entire audience to their feet when she scored the first basket of the game just 19 seconds. The Trojans scored the game’s first 13 points before the Eagles jumped on the scoreboard making it 13-3.

They closed out the quarter on an 8-0 run. Davenport scored all eight points and the Trojans went into the second leading 24-5.

The Trojans didn’t allow a point in the second quarter and the 8-0 run that started the first turned into a 27-0 run heading into halftime with the Trojans leading 43-5.

With the game well in hand, the Trojans kept their foot on the gas pedal again in the third quarter. Samira Moore had three points in the quarter. The Trojans outscored the Eagles in the third 16-7 and went into the fourth holding a 61-13 lead.

With the game out of reach, Davenport and most of the starter stayed on the bench and watched their teammates take home the lopsided win.

Moore finished the game with 18 points, while Tatyana Siler had 11.

The Trojans will be back in action today when they host Love Joy High School.

Troy’s newest head coach Chip Lindsey stepped to the podium on Friday morning for an introductory press conference inside the... read more