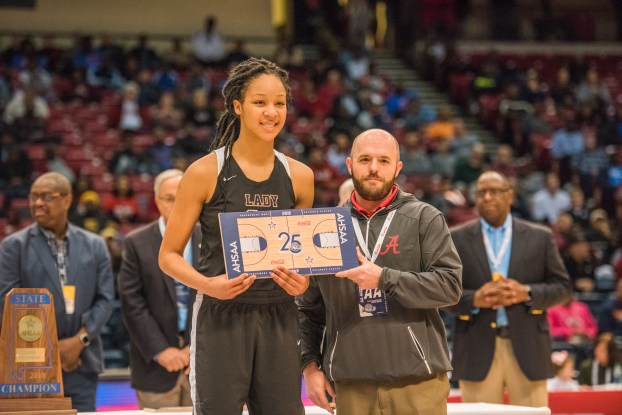 Officials with USA Basketball are “disappointed” that a Charles Henderson High School basketball player’s participation in Team USA appears to have cost the player her senior year of eligibility.

“USA Basketball is disappointed to learn of the Alabama High School Athletic Association (AHSAA) Central Board’s decision to uphold the suspension of Maori Davenport for the entire basketball season,” officials said in a statement. “USA Basketball regrets the confusion surrounding the circumstances and its oversight, and reiterates that neither USA Basketball nor the player knowingly or purposely violated the AHSAA rule.”

Davenport, a Rutgers signee and frontrunner for Miss Basketball, was deemed ineligible earlier this month after she received a check for her time with USA Basketball this summer. She appealed to both the Circuit 2 Council and the Central Board of Control, both of which ruled her ineligible, saying in a statement that by receiving the check Davenport violated the AHSAA’s Amateur Rule.

Davenport, future Rutgers Scarlett Knight and Miss Basketball front runner, was deemed ineligible earlier this month after she received a check for her time with USA Basketball this summer.

Team USA payed Davenport for her time in the FIBA Americus 18U Tournament in Mexico City.

USA Basketball Chief Communications Officer Craig Miller said the eligibility conflict is a first for USA Basketball. “The U18 team is typically players who have completed their high school careers or are in college,” Miller said. Davenport was one of two underclassmen on the team.

Miller said the mistake occurred when USA Basketball failed to confirm  the official rules in the state of Alabama.

“Each state has different rules,” Miller said. “What’s legal in Colorado may not be necessarily allowed in Texas. That is where the error happened. There should have been a call to the Alabama state high school association to see if the payment that everybody else was getting was permissible, and that didn’t happen. Part of that reasoning was nobody caught that she had a year of eligibility remaining.”

The checks were mailed to players after the summer season. CHHS officials have said that Davenport’s family reported receiving the check in error.

Miller said Team USA officials discovered in November that Davenport had a year of eligibility remaining, and the organization was taking responsibility for the mistake.

Davenport played in the first four games of the season, but has not been playing since Nov. 29. While the Trojans are undefeated in their 10 games since then, they are forced to forfeit the games in which Davenport played, bringing their record to 10-4.

Davenport began the season as a candidate for the Miss Basketball award after finishing runner-up a season ago. Davenport entered the season ranked as the 15th best recruit in the 2019 class by ESPN as a 5-star recruit.

She finished last season scoring 18 points per game with 12 rebounds and 5.5 blocks. Davenport and the Trojans have advanced to the state championship in each of the last two years and won their first ever championship last season.

Davenport was the first was the first high school player from the state of Alabama to be part of a USA U18 team since the event started in 1988 (12 teams).

For 29 years, the first face people have seen when entering the Troy Public Library and the last face seen... read more