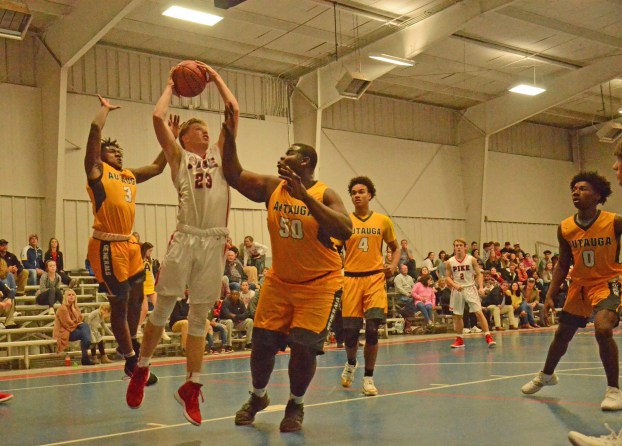 The Pike Liberal Arts Patriots swept the Autauga Generals on Thursday night inside the “Patriot Oven” in Troy.

The Patriot boys won their fourth consecutive game on Thursday night and improved to 6-4 on the season when they knocked off the Generals 67-43.

The Patriots trailed for a short time. They fell behind 5-1, but from that point on the Patriots never trailed on their way to a comfortable 24-point win.

“We knew this was going to be a quality opponent,” said Patriot head coach Allen Ponder. “These guys (Autauga) just got off football. They have had two practices and this is just their second game. We figured they would try and get out and run and use their athleticism against us. I thought our guys did a great job at getting back and taking away the transition points. I thought we did a good job at getting out and running at times.”

After trailing 5-1, the Patriots outscored the Generals 15-5 the rest of the first quarter and went into the second leading 16-10.

The Patriots pushed their lead to double digits when Max Copeland made a shot to give Pike a 32-22 lead. The Patriots never saw their lead shrink back down to single digits the rest of the way.

After going into the break at halftime leading 36-25, Jade Sikes scored five of the first eight Patriot points to push Pike’s lead to 44-27.

“That was huge,” Ponder said. “We knew they were going to come out after halftime and punch us a little bit. I thought we did a good tonight at handling the pressure and finding the open man.”

Sikes finished the game with 17 points. Copeland led the Patriots on the night with 19 points.

The Patriot girls kicked off the evening with close 25-24 win over the Lady Generals. The win for the Patriots snapped a five-game losing streak.

Tiffany Johnson nailed a three pointer with 1:00 remaining in the game to hand the Patriots a one-point lead. The Generals quickly responded on their next possession and retook the lead by one with 50 seconds remaining.

The Patriots scored the final two points of the game on free throw makes by Ansley Adams and Shelby Renfroe to put the Patriots up by one with :23 remaining. The Generals had an opportunity to win at the buzzer, but a breakaway layup opportunity ended with a traveling call, giving the Patriots the win.

Adams finished the game with a team-high 14 points, thanks in large part to four three pointers.

The Patriots will be back in action today when they take part in the Abbeville Tournament.

GALLERY: Santa Claus is coming to town and stopping at TES

Santa Claus stopped by Troy Elementary school today to visit all the nice boys and girls who were eager to... read more