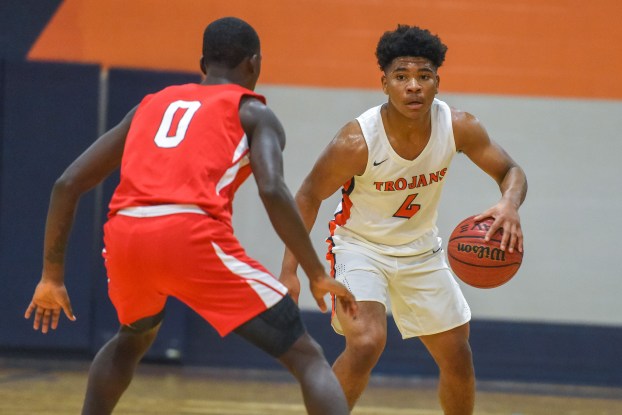 Josh Foster looks for an open teammate during a game against Eufaula last Friday night.

The Charles Henderson Trojans dropped their second consecutive game on Tuesday night when they fell to the 7A Enterprise Wildcats.

The Trojans now find themselves 4-3 overall as they prepare to take on 6A Dothan later this evening in Troy.

The early portion of the Trojans’ schedule has been full of games against teams in higher classifications. So far this season, the Trojans have gone up against a gauntlet of a schedule that has featured top-10 ranked Enterprise out of 7A, as well as a pair of games against ranked 6A schools in Mae Jemison and Eufaula.

“We are a work in progress and the competition level is strong,” said head coach Doug Branson. “We are having to figure it out on the fly. The guys are buying into what we are trying to do.”

In their three losses against the larger schools, the Trojans have held their own, losing by 13 and 12 against the likes of Eufaula and Mae Jemison before losing by just two against Enterprise on Tuesday.

The Trojans entered the season with just two players that saw full-time varsity action last year. Even though they have the seniors and the juniors, Branson feels like he has a team new to the game of basketball.

“We are new together,” Branson said. “Yes, we have three seniors, a junior and a sophomore out there, but they haven’t played together. One of my seniors hasn’t played since middle school so, as a group collectively, we are new.

“We are going through battles with good basketball teams and we are holding our own. We are just trying to figure out how to finish those games against quality teams.”

The Trojans are in the midst of playing eight games in a 12-day span. The schedule doesn’t get any easier for the Trojans during that stretch. They take on Dothan this evening before playing the likes of Pike County and Barbour County.

“The last person I spoke out to was Don Maestri,” Branson said. “He said ‘Coach, don’t let your record define you. Make sure you’re defined by your progress.’ That’s the key for us right now; we have a daunting task. These young men and young ladies are going to be taxed over the next couple of weeks. Our goal needs to be that we are moving forward every day.”

The Trojans’ next challenge comes in the form of Class 6A Dothan.

The junior varsity boys will begin the action at 4:30 p.m.

The Middle Tennessee State Blue Raiders didn’t lead in the second half until the game’s final minute, but it was... read more