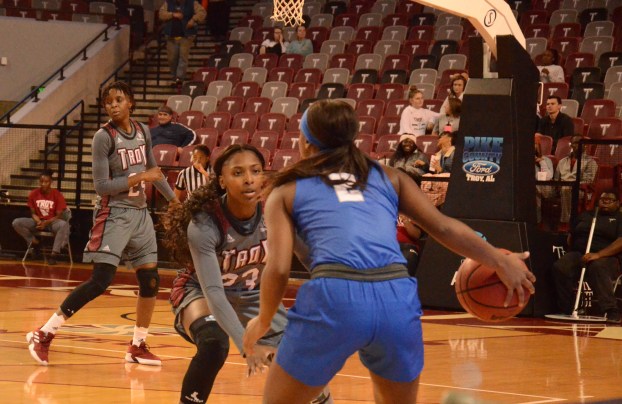 The Middle Tennessee State Blue Raiders didn’t lead in the second half until the game’s final minute, but it was enough in their 67-64 win over the Troy Trojans’ women’s basketball team on Tuesday night.

The loss for the Trojans snapped a six-game winning streak and brings their overall record on the season to 6-2. It was Troy’s first loss since the season opener against Florida State.

Kayla Robinson finished the game with a double-double at 13 points with 12 rebounds. Shaterrika O’Neil led the Trojans in scoring with 14 points, while Harriet Winchester had nine and Amber Rivers had seven.

The Trojans held the Blue Raiders to 17 percent shooting in the opening quarter. They held them to just three made baskets in the frame. The Trojans shot 46 percent in the quarter and led by as many as 9 points before heading into the second quarter leading 14-7.

The Blue Raiders battled back to take the lead with just 5:00 remaining in the second quarter, before the Trojans outscored the Blue Raiders 13-7 the rest of the quarter and went into halftime holding a 29-24 lead.

Harriet Winchester finished the half with nine points after making three of her five shots in the opening 20 minutes.

The Trojans entered the game undefeated this season in games they led at halftime. That streak came to an end on Tuesday night.

The game was tied three times during the third quarter, but the Trojans never trailed. The Trojans had a couple of big three-pointers by Amber Rivers and Joponica James and they went into the final frame leading by three at 48-45.

The Trojans went on an 8-0 run early in the fourth quarter to go up 11. A late Blue Raider run gave them their first lead with just over 1:00 minute remaining.

The Trojans had the ball with less than a minute to go, but a charge call gave the Blue Raiders possession.

After a pair of Blue Raider free throws with 8.3 seconds remaining, the Trojans had one more chance to send the game into overtime. Kayla Robinson got possession of the ball and put up a three-pointer, but the shot was waved off due to traveling.

The Trojans will be back in action on December 12 when they host Talladega beginning at noon.