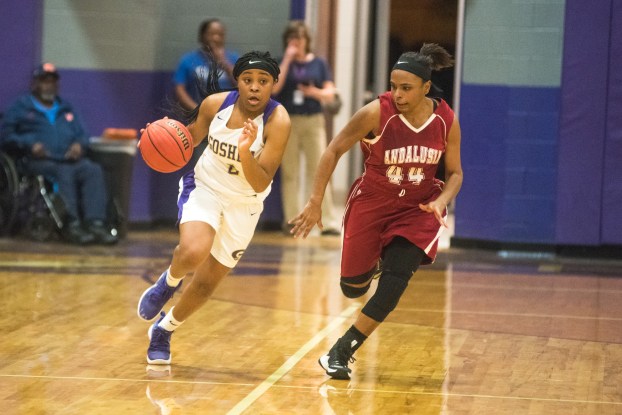 Messenger Photo/Jonah Enfinger Bree Griffin races down the court against Andalusia in a game last season. Griffin and the Eagles open the season on Monday against Carroll.

Lady Eagles hope to get back to winning ways

Like many other teams in the area, the Goshen Eagles are in wait-and-see mode with the early portion of the schedule.

The Eagles have only recently gotten together as an entire team, but Lowery has been impressed with what he has seen so far.

“We are optimistic,” Lowery said. “The girls are ready to play.

Over the last few seasons, the Eagles have been led by guard Bree Griffin.

“I am expecting Bree to be Bree,” Lowery said. “I expect her to do what she has always done. She will be our leading scorer again, I’m sure. I expect her to be the coach on the floor and the leader.”

After a busy summer that included an invite to the AHSAA All-Star Game as well as spending time playing AAU ball, Griffin looks to be a leader once again.

“She has really made a lot of progress over the summer,” Lowery said. “She was invited to play some travel ball and she got some work with Wesley Persons. She is taking her game to another level.”

Playing with the state’s best throughout the summer opened up Griffin’s eyes.

“It helps tremendously because you’re able to learn from your peers,” Lowery said. “She talked to me about talking with players from around the state. She picked up a few pointers. She mentioned to me that she has to become more vocal and I expect her to become more vocal.”

The key to the Eagles season, according to Lowery, will be how much production the team receives from his role and bench players.

“They key to the success this year will be how well our B players play,” Lowery said. “We are looking for Jamecia Berry, Anastasia Mallard and Harmony Robinson to play big for us on the inside.”

The Eagles have a recent history of success. They made it past the area tournament as recently as a couple seasons ago. With players still on the roster from that team, the Eagles are hungry to make another deep run.

“I think it’s going to take some confidence,” Lowery said. “The intangibles are there. We have speed, we have the size and we have the shooter. Ella Baker has really progressed nicely over the last few weeks. We just have to get in there and play.”

With a few games being postponed, the Eagles may only get to play up to four games this month, two of which will be against Calhoun. They will also play Ariton and Brantley during the month of December.

“I think we will be at somewhat of a disadvantage playing because we haven’t played yet,” Lowery said. “I would have loved to have 10 to 12 games under my belt by that time. Last time we ran into the same thing because of the success of our football team.”

Goshen and Calhoun are scheduled to start at approximately 5:30 p.m.

Evan Rose, a graduate of the Pike Agriscience Academy at Goshen High School, was back at his alma mater Tuesday... read more