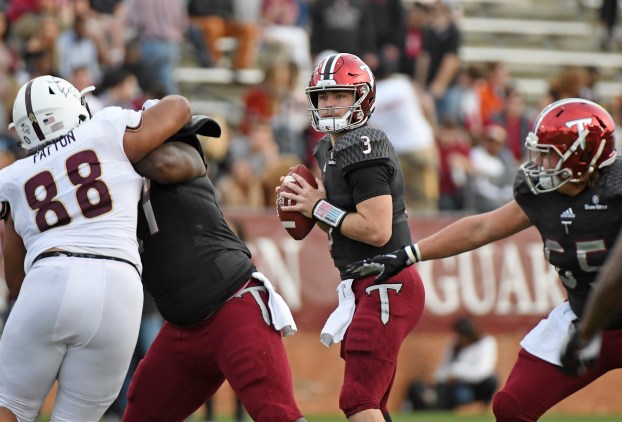 Troy quarterback Sawyer Smith (3) looks to pass during the first half of an NCAA college football game against Texas State in Troy, Ala., Saturday, Nov. 17, 2018. (Photo/Thomas Graning)

The Troy Trojans travel to take on Appalachian State on Saturday with plenty to play for.

Troy will put its undefeated conference mark on the line against the second place Mountaineers for the right to host the first-ever Sun Belt Conference Championship on December 1.

The Trojans have rattled off 13 straight conference victories. It will take 14 in order to accomplish their preseason goal of playing for a championship.

“A lot is at stake,” said head coach Neal Brown. “Winner wins the East; the winner hosts the first ever conference championship game. Our guys are excited about the opportunity.”

After holding on to defeat Texas State last Saturday, the Troy offense looks to get back on track against the conference’s top-ranked scoring defense in the Mountaineers. Appalachian State has allowed 15.9 points per game. They have allowed double digit points four times, one of which was a 45-38 loss to No. 9 Penn State in overtime.

“They’re built a lot of the same ways (we are),” Browns said “What I mean by that is, defensively, both units are smaller but fast. Both put a premium on taking away the run and creating negative plays. So I think there’s a lot of similarities defensively.”

Troy’s win over Texas State marked the first time since 2000 that they defeated a team without scoring a touchdown. That win came against Stephen F. Austin, 6-0.

The Trojans mustered 220 yards of offense, but four Tyler Sumpter Field goals proved to be enough.

“It was not pretty,” said Troy quarterback Sawyer Smith. “We just didn’t get in a rhythm, I don’t think. I made a few bad decisions early in the game in the first half. As the game played on, I tried to make good decisions again. It kind of looked better, but not good by any means. I’m ready to get back this week and get back in the room and go to work.”

The Trojans forced six turnovers, including five interceptions against the Bobcats last week. It was the most forced turnovers since they turned North Texas over five times in last year’s New Orleans Bowl.

“Our guys did a good job making plays on the ball,” Brown said. “We haven’t had a ton of opportunities to get interceptions this year and they took advantage of it. Unfortunately, we didn’t turn it into very many points, but I thought, defensively, in the first half we had them on their heels.”

The Mountaineers boasts the top scoring offense in the conference in both overall scoring at 389 and points per game at 38.9.

Alabama’s own Zac Thomas mans the quarterback position for the Mountaineers. He has played in nine games this season. He has completed 65 percent of his passes and has thrown for 1,674 yards and has 16 touchdown passes.

“I think he’s very similar to Kaleb Barker,” Brown said. “They are both fast, he’s an accurate passer, he has the ability when the play breaks down to scramble and he’s played at a high level. This is his first year as a starting quarterback and he’s been really productive.”

The Mountaineers have shared each of the last two conference championships including last year when they split with Troy.

Both teams will take one step closer on Saturday to claiming the outright championship.

“This is the week,” Smith said. “This is what we work for 364 days out of the year, working hard to do. This is what it comes to. We couldn’t be in a better position. Looking back at last Saturday, it was a bad offensive game, but this is a new week. We survived and we advanced. That’s all we can ask for.”

Kickoff is scheduled for 1:30 p.m. and can be seen on ESPN Plus.

GIVING MORE THAN THANKS: Griffin family carries on Thanksgiving tradition

Seventeen years ago, Cornelius and Kimberly Griffin were living in New York City. He was a defensive tackle for the... read more