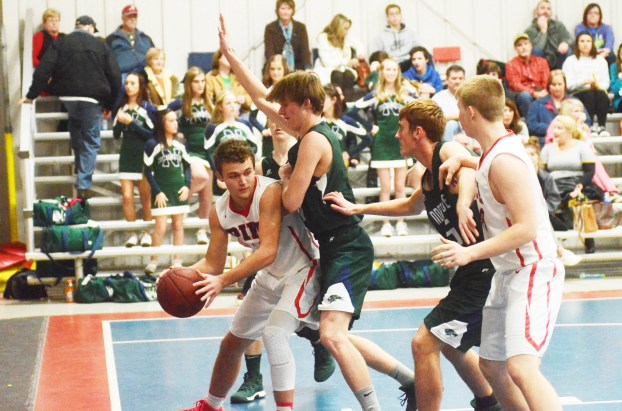 Messenger Photo/Mike Hensley Jade Sikes looks for an open teammate during a game last season. The Patriots hope for a successful 2018-2019 season.

The Pike Liberal Arts Patriots are just under three weeks removed from football season and, with one game under their belt, the basketball team hopes to make a deep run this season.

With so many of their players coming from football, the Patriots hope to make a quick transition into basketball season.

“It’s just like any season,” said head coach Allen Ponder. “We’re trying to get football out of most of them and basketball into them. Our guys are in shape, but there is a big difference between being in football shape and being in basketball shape. We are trying to get into the flow of things.”
The Patriots dropped their first game of the Lee Scott Academy Tournament on Monday 50-34 to Tuscaloosa Academy.

“It was a good opportunity for us to get our feet wet against a really good basketball team,” Ponder said. “They showed us a lot of areas that we need to improve.”

The Patriots enter the season with more size than in years past and because of that they may look a little different on both ends of the floor.

“I think our identity is yet to be seen,” Ponder said. “We have a little more size than we have had in the past. At the same time, we still have the same amount of quickness. I think this team can be very versatile. We can do a lot of different things on the defensive end. We are going to be a lot different this year.”

The Patriots will have plenty of senior leadership this season, which includes Cody Hollis, Max Copeland, Jade Sikes and Tristen Carter.

“That’s just a good nucleus,” Ponder said. “Between Max, Cody and Jade, they have played in our program for three years. They know what to expect, which makes it a lot easier because they can bring the younger guys along.”

Before the calendar flips to 2019, the Patriots will have the opportunity to play a challenging schedule to start the year.

“I don’t know what idiot set this schedule up – I guess it was the head coach,” Ponder said. “We are playing a tough early schedule. It’s a good thing and it’s a bad thing. You always want to build confidence in the early part of the schedule. This year we set up a much more difficult schedule.”

After playing Tuscaloosa Academy on Monday, the Patriots played host to Lee Scott on Tuesday. After Thanksgiving, the Patriots will host Success Unlimited on Monday.

“The road for us is not easy, but right now the message to our team is to not get frustrated and to not get discouraged. Understand that it’s a long season. It’s not a make or break in the first three games.”

The Patriots ultimately will try and get over the hump in the Elite 8 this season, a spot that has given them trouble in years past.

“We have run into a road block the last several years that I have been coaching the varsity, in the Elite 8,” Ponder said. “I think this team has a different mindset. I think this team has enough returning players and young energetic guys that we have the potential to go a little deeper this year.”

The Goshen Eagles kicked off the Daniel Powell era with a 54-52 win over Houston Academy on Monday night. They... read more