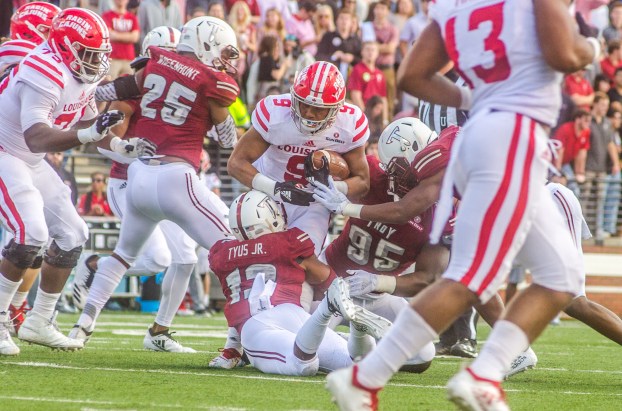 The Troy Trojans will honor 14 seniors when they square off with Texas State in the regular season home finale on Saturday.

The Trojans hope to inch closer to an Eastern Division championship with a win over the Bobcats on senior day.

“We’re back at home to play a much-improved Texas State team,” said Troy head coach Neal Brown. “It’s the last home game that’s on our schedule; hopefully, if we can finish this, we’ll have another one here. We’re going to honor a group of 14 seniors that not only had a tremendous impact on our football program, but on this university as well.”

The Trojans return home after picking up a 35-21 win over Georgia Southern last week, keeping them in first place in the east division.

“That win gets us to 8-2, and more importantly 6-0 in the league,” Brown said. “It makes each game after that even bigger.”

Ever since the calendar flipped to November, the Trojans have been in “survive and advance” mode, where each game is bigger than the last.

The third round brings the 3-7 Bobcats into Veterans Memorial Stadium. Texas State is coming off a 38-17 loss to Appalachian State last Saturday.

The Bobcats have averaged 22 points per game this season, while the defense has allowed 28.7.

“They’re much improved on defense from a year ago,” Brown said. “They play really hard. I think they’ve done a good job against some of the best offenses in our league. On offense, they’re multiple; they give a lot of different looks which will be a challenge for us defensively.”

The strength of the Bobcats may come on special teams. They are currently in the top 20 in blocked punts, 33 in punt returns, 39 in kick returns and 15 in kickoffs.

“I think the strength of their team is special teams,” Brown said. “I think (they’re) one of the more complete special teams units that we’ll play all year.”

If all things stay on its current path, Troy will play for a division championship next Saturday against the Mountaineers. Until that comes to fruition, the Trojans will focus on the Bobcats.

“I just think we have to be mature about it,” Brown said. “Honestly, we’re not at a point where we can take anybody for granted. We lost to a Liberty team that we probably shouldn’t have; they just beat us. We have a pretty recent history of when we don’t play or prepare well then it shows. I think our margin for error is really small.”

The Trojans have won all five of their home games against the Bobcats and are 7-2 all time against Texas State. Troy won last year’s meeting 62-9.

Back at it: Bulldogs take on Thomasville

The Pike County Bulldogs had just three days to prepare, but the Bulldogs head to Thomasville on Friday to take... read more