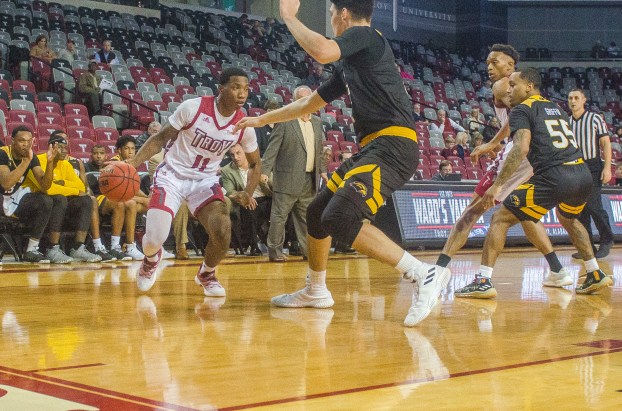 Messenger Photo/Jonah Enfinger B.J. Miller tries to drive to the basket against a Southern Mississippi defender on Thursday night.

Cold shooting plagued Troy in their 81-66 loss to the Southern Mississippi Golden Eagles on Thursday evening inside Trojan Arena.

The loss extends Troy’s losing streak to three games and they now sit at 1-3 overall.

“I feel like we ran into a buzz saw,” said head coach Phil Cunningham. “Southern Miss was really good. We didn’t respond the right way in the first half.  When you get hit in the mouth like that, you either have to step up and fight back or you hang your head and unravel. I thought we did the latter and unraveled.”

The Trojans shot just 38 percent on the night and made 10 of their 30 three-point attempts. The Golden Eagles shot 53 percent overall and made 13 of their 29 3-pointers, good enough for 45 percent.

The Eagles roared out to a 13-5 run to start the game. Midway through the half, the Trojans went over 6:00 without a made field goal.

Darian Adams led the Trojans in the half with six points on 2-5 shooting. Troy’s leading scorer Jordon Varnado was held to 1 point in the first half when he finished the first half without a field goal.

The Golden Eagles stretched their lead out to as many as 25 points at the 11:42 mark of the second half.

Charles Norman got the Trojans to within 11 with 7:32 remaining in the contest thanks to four second-half three pointers.

“In the second half, I was pleased with how we came out and fight,” Cunningham said. “We cut it down to 11 and had a chance to cut it down to 10, we just couldn’t do it. Give them credit, they were really good tonight.”

Norman led the Trojans with 16 points on the night. Alex Hicks finished with 13 points, while B.J. Miller had 11.

Varnado finished one point shy of a double-double with nine points and 10 rebounds, but made just three of his 14 shots.

“I don’t know if I have ever seen him struggle like he did tonight,” Cunningham said. “Usually, when he comes out slow like he did, he will usually respond at some point in the game. He never did tonight, he was struggling tonight.”

The Trojans will be back in action on Sunday when they resume play in the Barclays Center Classic when they host Central Arkansas beginning at 2 p.m.