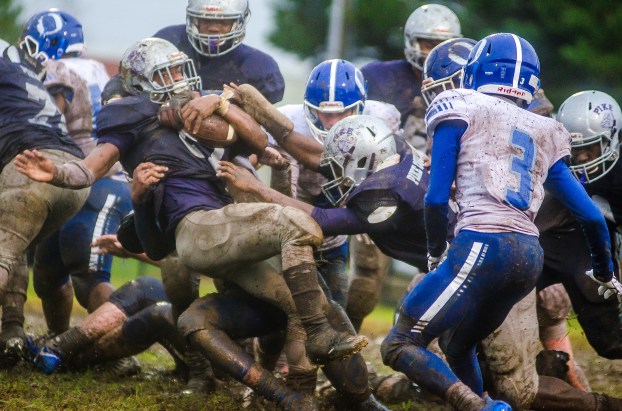 The Pike County Bulldogs played in the rain and mud on Monday afternoon. Just four days later, they travel to take on Thomasville this evening in the second round of the state playoffs.

Back at it: Bulldogs take on Thomasville

The Pike County Bulldogs had just three days to prepare, but the Bulldogs head to Thomasville on Friday to take on the Tigers in the second round of the Class 3A State Playoffs.

Due to a wall collapsing in the visiting team’s locker room at Pike County High School, the Bulldogs were forced to push their first-round game against Oakman to Monday afternoon.

In wet and muddy conditions, the Bulldogs prevailed 21-8.

“I learned a lot about them,” Holland said. “We were all eager to play on Friday and those things didn’t work out. Our guys understood that and they stayed focused. I thought they would have a tough time with it but they didn’t. They came in and worked and played hard.”

Now they have had to prepare in a hurry for the 2-loss Tigers.

“It makes it tough,” said head coach Fred Holland. “It makes things go a lot faster than what you normally want. The players understand. Coming out of that game, you just have to get everything in and get ready for the next game. You have to play through the circumstances that you have.”

Coming off a win, the hope is that the Bulldogs enter the game with plenty of momentum.

“Coming off a win like that is very important,” Holland said. “You are in the playoffs and you have to deal with certain situations. You have to stay focused. We enjoyed the win, but it’s over and Thomasville doesn’t care anything about it.”

Minus the normal bumps and bruises, the Bulldogs got out of the short week fairly healthy.

“We are in the twelfth, thirteenth week, so all teams are going to face situations like that,” Holland said. “It’s something we have to deal with. For the most part, I think the guys are OK.”

The Tigers enter round two after knocking off Beulah in the opening round 7-0. Despite the seven points, the Tigers come into the game averaging nearly 30 points per game this season, while allowing 14.

“They are a very good team, especially coming from 4A to 3A,” Holland said. “They don’t play a lot of players both ways. We are going to have to play really good to do some good things against them. They spread you out and they have two good backs. They do a good job controlling the front on offense and defense. Defensively they get into a 5-2 and they have a lot of guys that can run and get to the ball.”

Kickoff is set for 7 p.m. at Anderson Field in Thomasville.

Wednesday was a historic day for Charles Henderson High School and ladies athletics as five student-athletes secured scholarships at an... read more