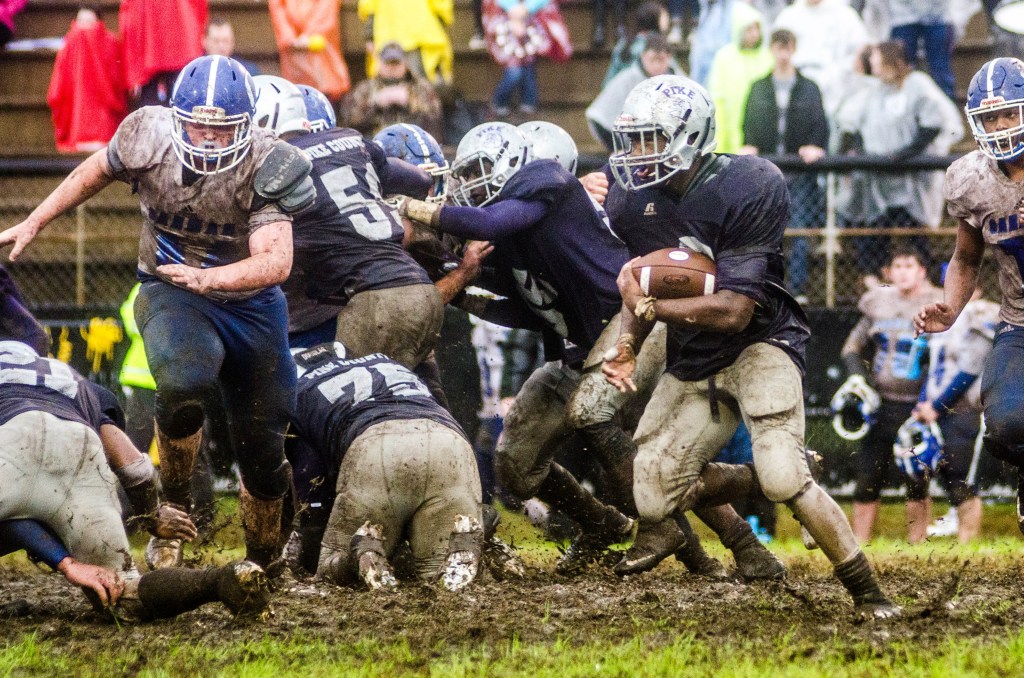 The Pike County Bulldogs overcame stormy and sloppy conditions in their 21-8 win over Oakman in the opening round of the Class 3A State Playoffs on Monday afternoon.

The game was originally scheduled for Friday night, but the game was moved to Monday after five Oakman players were injured Friday by a wall that collapsed in the vistors locker room.

“We got it done,” said Pike County head coach Fred Holland. “I am proud of the guys for doing the job and winning the first round. We faced a lot of adversity, but I am proud of them.”

After rain fell on the Pike County area throughout Monday morning, the heaviest rain fell on Bulldog’s Stadium throughout the first half of the game, leaving the playing surface under water and mud.

“It was extremely difficult,” Holland said. “We had enough plays and we did enough to overcome. Both teams played in the same thing, there were terrible conditions, but our guys pulled through.”
The Bulldogs scored the game’s first 21 points, 15 of which came in the first quarter.

“It’s very important, especially in the situation we were in with the conditions” Holland said. “It’s hard to handle the ball, it’s hard to block, so it was big.

The Bulldogs took their opening possession of the game all the way down to the Wildcat 1-yard-line before quarterback Jaidyn Wilson fumbled the ball over to Oakman.

On the first play of the Wildcat drive, the Bulldogs got it right back when Jeremiah Johnson scooped up a loose fumble and returned it for the game’s first touchdown. After a successful field goal attempt, the Bulldogs held an early 7-0 advantage.

“It was extremely big,” Holland said. “I was proud that we were able to get the ball and score some points.”

After fumbling the ball away in his first attempt, Wilson lunged his way in for a two-yard touchdown run to put the Trojans up 14-0. They added another point on a successful two-point conversion attempt that began as a bad snap on the PAT.

The Bulldogs took the opening possession of the second half and extended their lead to 21-0 after Rayshawn Reynolds galloped his way in for a 5-yard touchdown.

The Wildcats crept back to within 13 points after they turned a fake punt attempt into a 55-yard touchdown run to bring the score to 21-8 with 7:46 remaining in the third quarter.

Reynolds finished the game with 135 rushing yards on 21 carries.

The Bulldogs will hit the road to take on Thomasville in the second round on Friday. Due to Monday’s kickoff, they will have to prepare in a hurry.

“We are just trying to get through this one,” Holland said. “We’ll solve that problem when we get there. I’m just glad to be in the second round.”

Kickoff is scheduled for 7 p.m. inside Anderson Field in Thomasville.

‘IT’S ABOUT THEM’: Veterans honored at annual breakfast