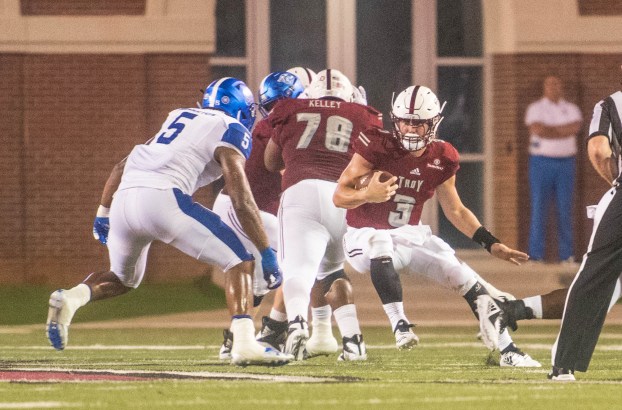 Troy seeks revenge in Satesboro against the Eagles

The Troy Trojans head to Statesboro this weekend to take on Georgia Southern with first place in the Sun Belt Conference Eastern Division on the line.

“Huge divisional game for us and our guys are looking forward to it,” said head coach Neal Brown. “We control our own destiny in the conference, but we have to continue to fight for that each and every week. I have a lot of respect for Georgia Southern and the tradition they have. It’s been a good rivalry going back for a long time here at Troy and like we talked about last week, champions are crowned in November. We won round one and we’ve got to continue to survive and advance.”

The last time the Trojans made a trip to Statesboro similar stakes were on the line. The Trojans strolled into Paulson Stadium with a share of the championship at stake. The Trojans came up short, losing to the Eagles 28-24 in the season finale.

“I remember the last 30 seconds of the game,” said Troy quarterback Sawyer Smith. “I remember the atmosphere in the locker room after the game. That’s just something, losing is awful and you don’t want to repeat that. I think that we will prepare this week and we will remember that game and have a chip on our shoulder. We will prepare hard and be ready to play on Sunday.”

The Eagles are a perfect 5-0 at home this season and 3-0 in conference play. The Trojans are 3-1 on the road this season. Their only loss came against Liberty.

“We just looking at it as a regular game,” said Troy running back B.J. Smith. “Commit to the standard and play Troy football. The last time we went over there it wasn’t the outcome that we expected or homed for. We can either do something about it this week or we can do nothing.”

Paulson Field provides an atmosphere where the fans are right on top of the bench and the student section provides a hostile environment for opposing teams.

The Trojans defeated the Eagles 38-16 last season at Veterans Memorial Stadium. Kickoff is scheduled for noon.

Heading south: Eagles travel to Mobile to take on Mobile Christian in the opening round of the state playoffs

The Goshen Eagles head to Mobile to take on Cottage Hill Christian this evening in the opening round of the... read more