Troy offense looking to stay on the field against the Eagles 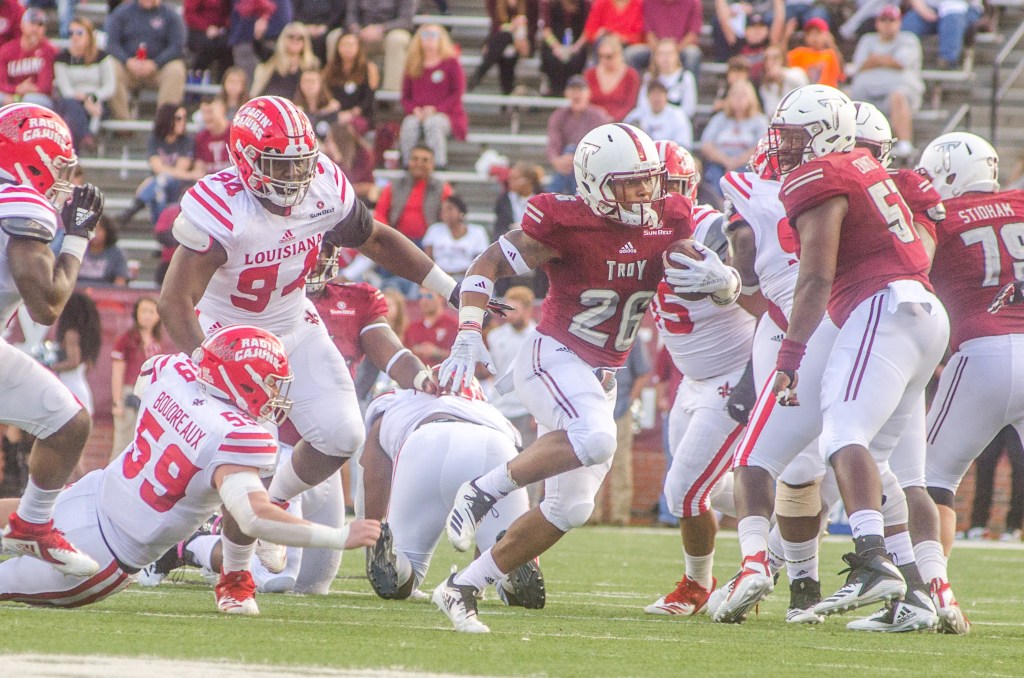 Offensive possessions will be at a premium for the Troy Trojans against Georgia Southern on Saturday afternoon.

The Eagles have run the ball a total of 446 times so far this season and passed the football 70 times. The Eagles average over 30 minutes of time of possession per game compared to 27 for their opponents.

The Trojans are averaging 29 minutes of time of possession throughout the season. The Trojans will look to stay ahead of the chains and pick up first downs, keeping their offense on the field.

“Every game it’s important to get ahead of the chains,” said Troy running back B.J. Smith. “We know the kind of offense they run, you can’t keep your defense on the field, so we have to make possessions count so we can let the defense rest.”

The Trojans are converting 39 percent on third downs this season. The Trojans will look to pick up key yards on first and second down in order to have more manageable third downs.

“You don’t want to get in second-and-15,” said offensive coordinator Matt Moore. “If you watch the video of these guys, people they’ve played, Ark-State consistently stayed in second-and-12, second-and-10. We have to get the chains to second-and-6, second-and-5 and not get in any third-and-long situations because they do a really good job of rushing the passer. We don’t want to get in that situation. We have to do a really good job of moving the chains, keeping things moving, and then taking shots and being smart about who we’re getting the ball to. Coach Brown does a great job of that.”

Playing on the road, the Trojans will try and take advantage of each offensive possession.

“We won’t have too many touches, will we?” said Troy quarterback Sawyer Smith. “They do that triple option and keep the ball in their hands. Honestly, if we go out there and this offense plays the way we need it to be and we click and execute, it doesn’t matter what they try to do. We will play a good game and play Troy football.”

The Trojans will have to contend against an Eagles defensive front that is similar to Troy’s defense.

“Last week, those guys were really big. They were huge,” Moore said. “They were really good-looking dudes, but they didn’t do a great job of just being twitchy and getting their hands on you and ripping off blocks and stuff like our defense does. This D-line is very similar to what our defense does. They try to get in the backfield. They try to penetrate and cause tackle for loss plays. They do a really good job of filling blocks and tearing off of them, and playing with intensity. It’s going to be a challenge for my guys this week.”

The Trojans and Eagles will kickoff at noon from Paulson Stadium in Statesboro.

New season: Trojans travel to Birmingham to take on…