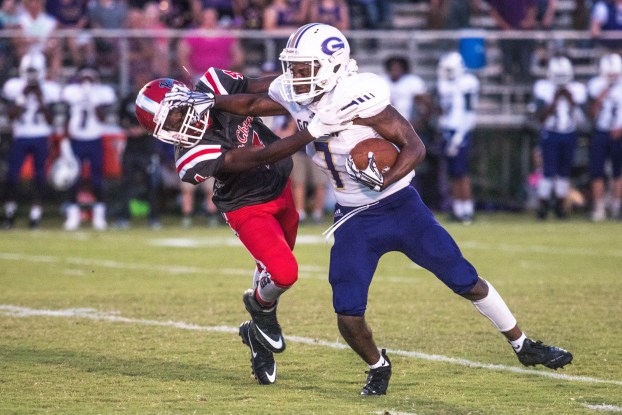 JaMarkus Sanford stiff arms a Zion Chapel defender during a football game earlier this season. The Eagles will head to Mobile today to take on Cottage Hill in the opening round of the Class 2A State Playoffs.

Heading south: Eagles travel to Mobile to take on Mobile Christian in the opening round of the state playoffs

The Goshen Eagles head to Mobile to take on Cottage Hill Christian this evening in the opening round of the Class 2A State Playoffs.

The Eagles secured their 11th straight trip to the playoffs after they finished the regular season in fourth place in Region 3.

“We’re getting ready to play,” said head coach Bart Snyder. “It’s another opportunity to play the playoffs. Over half the teams in 2A aren’t there. We are very fortunate that we are one of those that qualified. We think we have the team that can play even though our season has not been the season we wanted it to be.”

The Eagles had to wait until the final week to find out their playoff fate. Highland Home and Luverne secured the first two positions, buts spots three and four came down to New Brockton, Goshen and Samson.

“We have survived and we are there,” Snyder said. “We are looking forward to that. We think it’s been a good week of practice. Now we have to tie it all together and start a new season.”

If things went a little differently, Snyder believes his team could be sitting in the second or even top spot in the region for the second consecutive season.

“There are no excuses,” Snyder said. “We should have done stuff throughout the year. We allowed stuff to happen that we shouldn’t have allowed to happen. We could have been either where we are now or tied for first. We held this in our hands and we didn’t do the things we needed to do to put ourselves in top spot of our region.”

The Eagles faced half of their schedule against ranked teams this season. Snyder hopes games against Ariton, Highland Home and Luverne prepared his team for what is about to come against Cottage Hill Christian.

“Five of the teams we played were in the top 10 in the state,” Snyder said. “Those are very good ball teams. You want to play those caliber teams to get yourself better. Against most of them, we were in the ball game until we allowed turnovers and missed executions on special teams. You play those athletic teams and that allows our guys to prepare for what we are about to see.”

“This team we are about to play is really good,” Snyder said. “Cory Alexander, their quarterback, is very good. The kid they have at receiver, who they call Flip, is as good as any receiver that there is.”

The Eagles have yet to play their best ball according to Snyder. If his team could put together a complete football game, Snyder is confident in his team to contend against the Warriors.

“These guys know what they are capable of doing,” Snyder said. “They know they haven’t played at the level they want to play. If they come in and buy into that, we feel like we can shock a lot of people.”

Game time is set for 7 p.m. at Kingdom Stadium in Mobile.

Troy offense looking to stay on the field against the Eagles

Offensive possessions will be at a premium for the Troy Trojans against Georgia Southern on Saturday afternoon. The Eagles have... read more