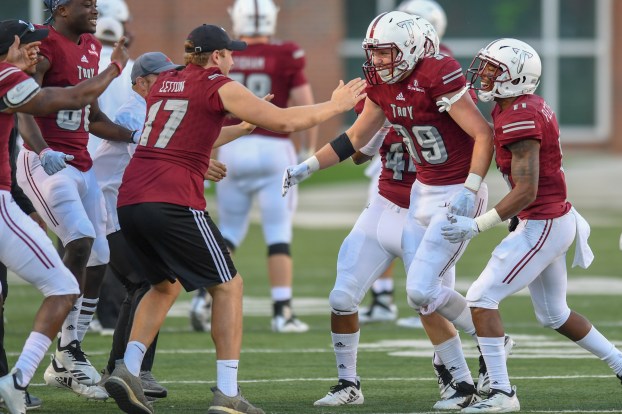 Troy redshirt junior Kyler Knudsen began Saturday’s game against Louisiana-Lafayette as a walk-on. By day’s end, Knudsen was a scholarship player for the Trojans.

In his first career start on Saturday, Knudsen had a late interception to help secure Troy’s 26-16 win over the Ragin’ Cajuns. By the time he could make it out of the stadium, the player known as Red Rocket was awarded a scholarship.

Knudsen finished his first career start with an interception and two pass breakups.

“I really made my mind up on Friday,” said head coach Neal Brown. “If he didn’t play as well, I may have done it on Monday, but it was going to happen either way. I wasn’t necessarily surprised that he went out and played well. He had a good week of practice. You can see him getting better. Did I know he was going to have two pass breakups and have the game-winning pick? I didn’t know that, but I wasn’t surprised that he played well.”

Knudsen, along with players and coaches, celebrated both the victory and the scholarship presentation. After a few moments of spirited celebration, Knudsen had to spread the word.

“I was kind of trying to process it. It felt like a dream,” Knudsen said. “You know those dreams that feel like they’re real life and I’m like ‘I’m going to wake up eventually.’ I never woke up. I was like, ‘This actually happened.’ Patrick came and found me and said, ‘Hey, do you want to go tell your parents?’ He took me to them. I walked out and my mom was crying, I guess, because I played well. They didn’t know I had earned a scholarship yet. I told them, and she cried even more. My dad started crying. My parents were there. My dad’s parents. My girlfriend and her family were there. It was just a really special moment.”

It was a moment that the young safety never dreamed would ever happen when he came out of North Gwinnett High School in Georgia. He spent his entire high school career playing wide receiver.

“It was kind of wild. Coming out of high school, if you would have told me I would earn a scholarship in college at safety, I would have thought you were out of your mind. After sixth or seventh grade, I played hardly any defense. I played defense in middle school, but … I never got in much. It’s been really special, coming in as a receiver, switching when Coach Vic asked me to switch without hesitation, just trusting him, putting on the weight they wanted me to put on, being able to go out and execute – it’s all been a really big blessing.

After spending his first fall and spring as a receiver, Knudsen spent the summer down in Panama City for the summer beach project.

“That was a really big opportunity for me, and it was encouraged to me by Coach Brown to go do that,” Knudsen said. “I had the ability to either stay and take classes here or go down there. I was like, ‘I’m going to take this step in my faith.’ I trusted that if I went down there, it wouldn’t affect my position as a receiver. Sure enough, I go down there and it affects my position as a receiver. I get called by Coach Vic later in the summer. He’s like, ‘Do you want to come play safety?’ I said, ‘Yeah. If this means I’m going to get to play, yeah, I want to play safety.’”

Koenning as a defensive coordinator noticed his players getting beat by a tall and quick receiver. He took a gamble and elected to bring him over to the defense.

“I said ‘What are y’all doing with this guy? Well, any way I can get him?” Koenning said. “I said I’d really like to have you. He said, you know what? I’m up for it. He’s never looked back. He’s gotten better. He has a positive attitude all the time.”

When Knudsen initially made the switch there was a mix of nerves and adrenaline.

“It was a little bit of both,” Knudsen said. “It’s like an adrenaline rush. If you’re going to jump out of a plane, you’re like ‘I’m going to go for it.’ At the same time, ‘I actually have to go for it now.’ All your nerves are running wild.”

Being a safety means you have to hit and tackle ball carriers, an area of the game that was foreign to Knudsen.

“When I played receiver in high school, I didn’t really like to be the one who got hit, even though that’s the role really as a receiver. You get hit, and then you move on. I wanted to be the guy who delivered the hit when I was the receiver. That just transferred to safety. Obviously, I’m getting hit by or hitting a lot of bigger guys, like running backs the size of Josh Anderson or Jordan Chunn. They’re some pretty big fellows. I’m tall, so it’s hard to get down there. I just try to throw my body in there and make the most of it.”

After getting his first taste of defense while working on his backpedaling drills in the sand at Panama City, Knudsen has grown into a safety that gets better on a daily basis.

“Coming into this season, being older, being a little wiser at what we’re doing, Coach Vic is having a little more confidence in playing me more,” Knudsen said. “At Nebraska was when I first got my initial, ‘Hey, you’re going to play a bunch, so be ready.’ I’ve taken that mental approach to every game I’ve gone into. Prepare like you know how to prepare, and however much you need to play is how much you need to play.”

Knudsen began his career as an afterthought on the Troy offense. A few years later, Knudsen is on scholarship on defense.

“What was that movie, Dumb and Dumber, ‘So you’re saying there’s a chance?’ It was like that,” Koenning said. “He just bought in. He’s part of the room; it was evident after the game when coach told him he was going on, the way the team responded shows he has earned the respect and admiration of his teammates.”

The Troy Trojans opened up the 2018 season with a 95-60 win over the Fort Valley State Panthers on Tuesday... read more