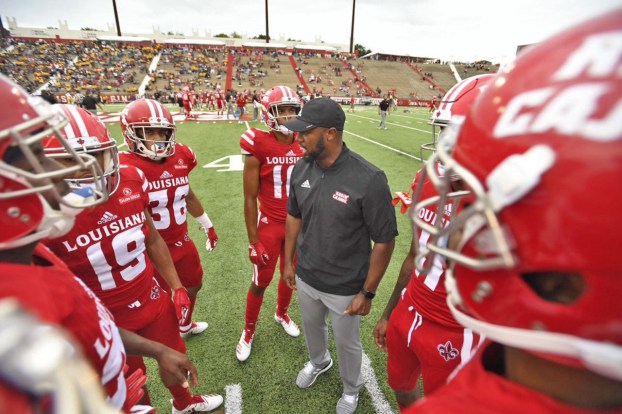 A familiar face will be patrolling the sidelines of Veterans Memorial Stadium on Saturday afternoon. Former Charles Henderson Trojan and Auburn Tiger Zac Etheridge will make his first trip back to Troy as cornerback coach of the Louisiana Ragin’ Cajuns.

Etheridge graduated from Charles Henderson in 2006 and became a star on the Auburn Tiger defense until 2010.

After a brief stint in the NFL, Etheridge decided to take up coaching in 2012. Seven years later, Etheridge is coming back to Troy as a member of the Ragin’ Cajun staff.

“I’m fired up to come back home,” Etheridge said. “Obviously I get to see some familiar faces and a lot friends and family that I haven’t seen in a while. I was a Charles Henderson Trojan and now I get to face the Trojans, which is exciting.”

Not only does Etheridge get to come back to Troy to take on his hometown team, but he gets to return to the same field where he would terrorize his opponents’ offenses.

“That’s awesome,” Etheridge said. “I have never really thought about it that way. It fires me up to be on Larry Blakeney Field. It’s going to be exciting to see the guys fly around and see some of the familiar faces on the other sideline as well.”
Etheridge long had a knack for coaching. The interest came from his coaches who played an impact on his playing career.

“I loved the way they taught me the game and I was able to learn from it,” Etheridge said. “When I was on the field, I was always trying to get guys lined up. I knew from a football IQ standpoint where other guys were supposed to be. Giving back that knowledge and experience to the guys, it was a no-brainer to want to be in the coaching industry.”

Etheridge played in the NFL for the Oakland Raiders. Following his playing time, Etheridge went on to coach at both Penn State as a graduate assistant in 2012 and at Georgia Tech from 2013-14. In 2016 and 2017, Etheridge spent time coaching cornerbacks and outside linebackers.

“It was something that I put some thought into towards the back half of my career,” Etheridge said. “This is what I wanted to do for the rest of my life. It was rough at first because all you could imagine was suiting up again. I put that to rest knowing that it’s not going to happen again. Now I just pour into these kids. At first it was a little hard, I felt like I could still do it, but I knew once I made that decision I was done.”

There were challenges at first for Etheridge. Challenges that included recruiting and the daily grind that largely goes unnoticed by the casual observer.

“The hardest thing is adjusting to what all goes into recruiting and the time away from home,” Etheridge said. “That’s what you don’t know, the behind the scenes stuff that goes on. You get used to it. It’s a grind every day. You have to embrace it and trust the process.”

Etheridge’s trust in the process was put to the ultimate test when he was still a player. In 2009, during a game against Ole Miss, Etheridge brock his neck in the first quarter. After nine months of extensive rehabilitation, Etheridge worked his way back to the Auburn defense in 2010 and helped lead the Tigers to a national championship.

It’s a story that Etheridge continues to tell his players.