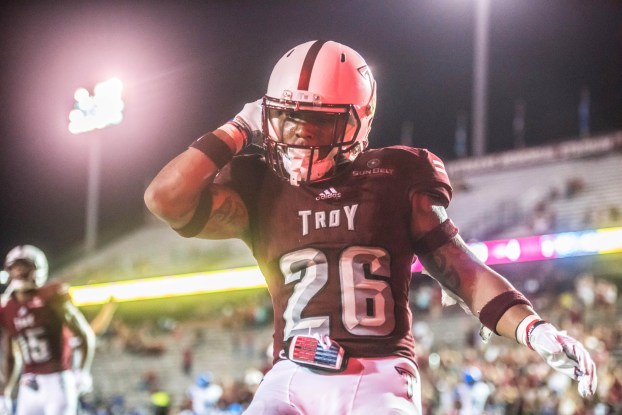 After knocking off rival South Alabama last Tuesday, the Trojans get back to work before their homecoming showdown with Louisiana on Saturday.

The Trojans (6-2, 4-0) currently sit on top of the Sun Belt Conference East Division. They hope to stay there with a win on Saturday.

“It’s a huge conference game for us,” said head coach Neal Brown. “Probably along with Georgia Southern, they are the hottest team in our league right now. Really going back to the Alabama game, from the second half moving forward they have played at a high level. You can see their confidence rising.”

As November draws closer, the Trojans arguably get set to play their toughest stretch of games. After Louisiana, the Trojans travel to take on Georgia Southern. They play their final home game against Texas State before hitting the road to take on Appalachian State in the season finale.

“It’s November football,” Brown said. “What I told the team yesterday is ‘November separates pretenders from contenders.’ We are going to find out which one we are. I think the key for us is that we have to keep making steady improvements. I think the teams that make improvements in the month of November and keep climbing and keep getting better are the teams that are able to hold up the hardware at the end of season. We have to have a great week of preparation.”

The goal for the Trojans all season long has been to host the first ever Sun Belt Conference Championship game. Right now they control their own destiny. Currently tied with Georgia Southern and one game in front of the Mountaineers, the Trojans have all their goals in front of them.

“It is going to define our season and I don’t think there is any denying that,” Brown said. “It’s not only where we finish in the conference standings, but also where we go bowling and all of those things. You have to approach it week-to-week. This week we approach a team that is dangerous. They are gaining confidence by the week. We have to figure out a way to play our best and keep getting better.”

Ghosts, goblins, ghouls and all kinds of other creatures and characters filled the Square Friday afternoon to trick or treat... read more