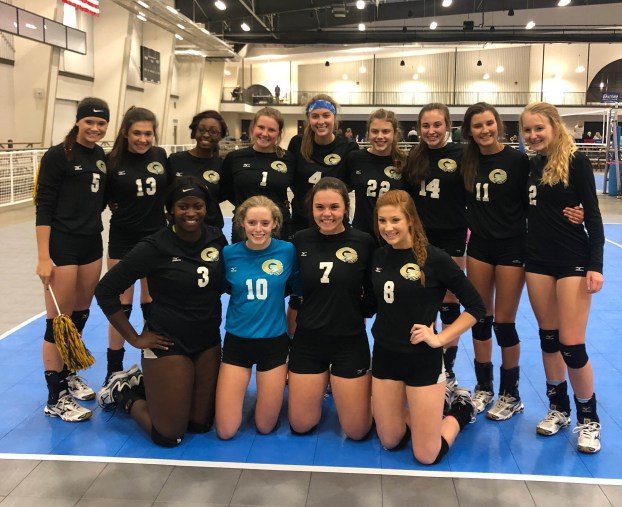 Serve it up: Eagles advance to state for fifth straight season

The Goshen Lady Eagles volleyball team will one once again make the trip to Birmingham this week to begin play in the Class 2A State Volleyball Tournament.

The Eagles will open up play on Wednesday morning beginning at 8 a.m. against Winston County.

The Eagles clinched a spot in their fifth straight tournament after they secured a third-place finish in the South Regional Tournament in Montgomery.

“It was a battle, but it was a good feeling to make it back,” said head coach Amy Warrick. “I was happy for this team and happy for the seniors, who can make one more trip back.”

“I didn’t think we played our best,” Warrick said. “I have seen us play better. I hope we can improve on our defense and our offense. We made too many errors and that was what we were doing at the beginning of the season. I am hoping we can play as well as we were playing at the end of the season and stick to our gameplan.”

Despite struggling with their serving and passing, the Eagles will once again represent Goshen in Birmingham.

“We managed to pull it out,” Warrick said. “It was by far not our best volleyball. We had a practice yesterday (Sunday) and we came in early this morning (Monday) to try and get used to the early morning start time. We came in and served to see how they were going to do early in the morning. We are hoping to get things cleaned up.”

The Eagles will be joined by seven other schools in Birmingham. The Ariton Purple Cats, who won the South Regional, will be the number one seed out of the south bracket. The Purple Cats and Eagles will be joined by G.W. Long, who finished as the number two seed coming out of the south bracket, and the fourth seed Fayetteville. Coming out of the north will be Altamont, Winston County, Addison and Cedar Bluff.

“There is some tough competition,” Warrick said. “I don’t really know what to expect because we haven’t seen these northern teams.”

The Eagles have four seniors on the team who have plenty of experience when it comes to playing in Birmingham.

The Eagles will make their fifth straight visit to Birmingham and that alone is a great accomplishment for Warrick and the Eagles.

“It’s a good thing,” Warrick said. “It says a lot about these girls and how bad they wanted it. We were missing some hitters at the beginning of the season and they came a long way. They bought into what we wanted to do and they played hard when they needed to win.”

The Eagles advanced all the way to the state finals a season ago before eventually falling to St. Luke’s.

This year, the Eagles will open the tournament against Winston County, the same team they beat last season to advance to the finals.

After knocking off rival South Alabama last Tuesday, the Trojans get back to work before their homecoming showdown with Louisiana... read more