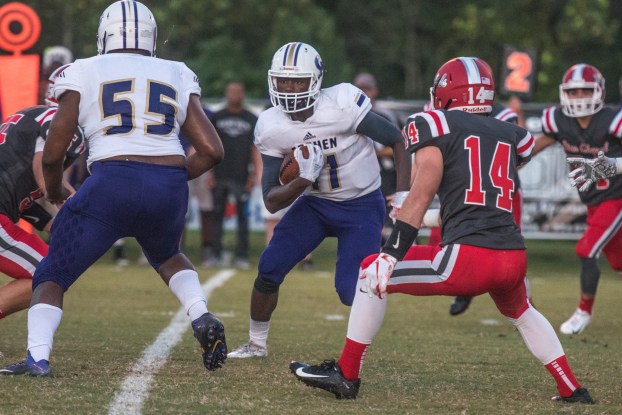 The Goshen Eagles picked up a needed 41-0 win over Central Hayneville last Friday. With a playoff berth on the line, the Eagles welcome in the first place Highland Home Flying Squadron.

“This is a big region matchup against a really good Highland Home team,” said head coach Bart Snyder. “They have some really good athletes and they are very well-coached. They are 7-1 and that speaks for itself.”

After beating the Lions on homecoming, the Eagles (4-4, 4-2) find themselves in third place in Region 3.

“It was a real big ball game,” Snyder said. “We had a really good week of practice and it was evident Friday night. It’s kind of carried over into this week. We are expecting a good game out of our players on Friday night.”

They Flying Squadron’s only slip up cam against Headland in the season opener. Since then, they have rattled off seven wins in a row including a 27-14 win last week against New Brockton.

“They just don’t make any mistakes,” Snyder said. “They execute really well. What we are going to have to do is make sure that we don’t make those mistakes.”

The Eagles find themselves in third place in Region three. A win would secure a playoff berth. Despite losing a large number of seniors last season, the Eagles have plenty of experience this season when it comes to late-season football games. Younger guys have also stepped up for the Eagles.

“It plays a huge factor,” Snyder said. “It’s a pressure situation. We count on a lot of people that haven’t put on a football uniform to play the game since maybe the seventh grade and their juniors or maybe seniors. It’s been great to have players like Jeff Warrick, who played last year, Hunter Shave and some of these people here that are younger and have stepped up for us.”

“Under Armour says it best: you have to protect this house,” Snyder said. “This is your home and you want to protect it. We’ve done OK with that, but three out of our four losses have been right here at the house. We have to get better at protecting our house.”

Following Charles Henderson’s 42-17 loss to Greenville at the beginning of the month, the chances of the Trojans making the... read more