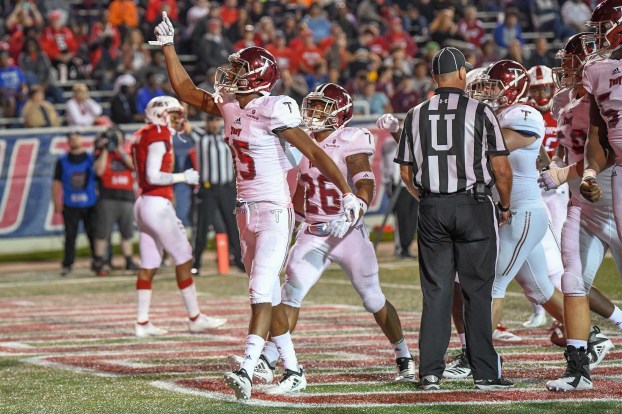 Photo/troy athletics Damion Willis celebrated after one of his two touchdowns against South Alabama on Tuesday night.

Ten days after the Trojans struggled to make the big play in a loss to Liberty, big plays were plentiful in Troy’s 38-17 win over South Alabama on Tuesday night.

The Trojans (6-2, 4-0) remain on top of the Sun Belt Conference East Division with the win.

“We went back to recommitting to the standard; the standard here is we expect to win every game,” head coach Neal Brown told the assembled media on Tuesday night. “All of our goals are still out there; 4-0 in the league, that’s the only number that we look at.”

In their loss to Liberty, The Trojans had four completions that went for more than 10 yards against a Liberty defense that struggled against both the pass and the run leading into the contest.

“They were only getting one to two yards on the receiver screen when they should have been four to six-yard plays,” Brown said after the loss. “I think (Sawyer Smith) lost faith and quit throwing and everything got suppressed in the run game, so we weren’t able to hit those explosive plays.”

That changed on Tuesday night against the Jaguars. In his second career start, Smith completed nine of his passes for 158 yards against the Jaguars. Smith used the deep pass on Tuesday night. Sawyer connected with Damion Willis for a 46-yard completion on the fourth play of the game, leading to a six-yard touchdown catch by Deondre Douglas to give Troy the early lead.

Late in the first quarter, Smith connected with Willis again, this time for a 44-yard touchdown pass.

Running back B.J. Smith also provided some electric plays. Smith had a 36-yard touchdown run and had another long run of 56 yards. Smith became Troy’s first player to rush for more than 100 yards in four consecutive games since Arrid Gregory did it during the 1996 season. Smith finished with 170 yards on 22 carries with one touchdown.

Willis led the receiving core with five catches for 132 yards and two touchdowns.

The Trojans will be back in action on November 3 when they host Louisiana-Lafayette on homecoming.

Troy Athletics MOBILE, Ala. – Sawyer Smith accounted for four touchdowns and the Troy defense pitched a shutout in the... read more