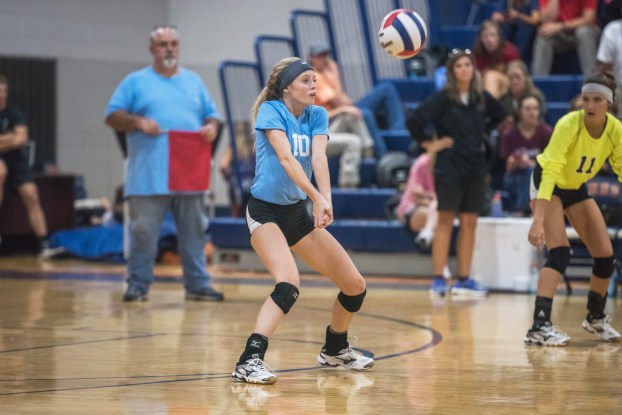 Messenger Photo/jonah enfinger Hannah Calhoun of Goshen hits the ball during a match against Charles Henderson earlier this season.

With the area tournaments now in the rearview mirror, local volleyball teams have their sights set on the South Regional Tournament later this week.

The Goshen Eagles, the Charles Henderson Lady Trojans and the Ariton Purple Cats all secured their spot inside Montgomery’s Crampton Bowl when they won their respected area tournaments on Monday evening.

The Charles Henderson Trojans will take on the Area 1 runner-up Satsuma after they swept Greenville and won a 5-game match with Rehobeth to claim the championship.

“We have some things to clean up,” said head coach Sonny Kirkpatrick. “Whenever we play hard, we have a chance. We just have to play hard all the time.”

The Goshen Eagles had to play just one match in the area tournament, sweeping the Luverne Tigers in three games. They now turn their attention to Thursday where they will play Central-Coosa, the area 8 runner-up.

Both round one and the quarterfinals will be played on Thursday. The Trojans will begin their match with the Gators beginning at 11:30 on court 5.

Goshen will take on the Cougars beginning at 12:45 on court 4.

The Ariton Purple Cats also made the regional tournament after they took home the Area 5 championship. They will play Choctaw County at 11:30 on court 1.

If the local teams advance past round two, the regional semifinals will take place on Friday, with the finals being played later that day.