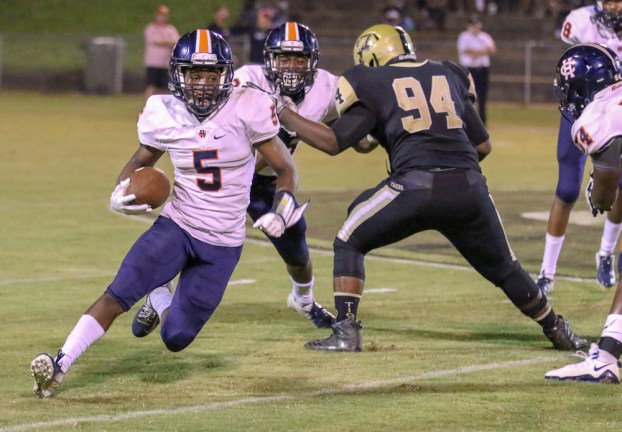 FRESH HOPE: Trojans have shot at playoff after Carroll win

The Charles Henderson Trojans snapped a three-game losing streak last Friday when they knocked off Carroll 17-7. Now they hope to inch towards a postseason berth with a win over Tallassee on Friday.

The Trojans (2-4, 2-2) felt the adrenaline coming off the win and turned into a strong week of practice.

“We have had a good week of practice,” said head coach Brad McCoy. “We got a little momentum this week coming off a big win on Friday night. The players have bounced around and have more of a positive attitude about what we are doing.”

The Trojans were plagued by turnovers during their losing streak. They cleaned that up last Friday night.

“We didn’t turn the ball over,” McCoy said. “Offensively we have had turnovers each Friday night. It really hurt our chances at scoring points. We didn’t do that. We were consistent. We scored on the first drive of the ball game, which is something we haven’t done.”

The Trojans came into the game on Friday allowing 40 points per game. They allowed just 7 on Friday.

“Our defense just played lights out,” McCoy said. “JB Sanders had a heck of a night with 10 tackles and eight assists. Overall we played really solid.”

A lot of people were taken by surprise when they saw the score, but McCoy said it was just a matter of time until the Trojans ended the streak.

“I wasn’t shocked that we beat Carroll,” McCoy said. “Last year we had two opportunities to score inside the 10 and we lost a 10-3 ballgame last year. We are playing with a lot of young guys. We have a lot of 10th graders on the team that I think are still learning their way. We haven’t had the type of season to really build on a lot of confidence. Friday night it just came together.”

The win puts them right back in the mix for a postseason berth. With a 2-2 record, a win in their final two region games will go a long way towards clinching a spot.

“We have to win at least one more,” McCoy said. “We have to win one of the next two to be able to make to the playoffs. Of course, Friday night is big, but we have two opportunities.”

“They have a very successful coach (Mike Battles) and a very successful program,” McCoy said. “They do a lot of different things on offense. A lot of old school, what we call a ‘Notre Dame box.’ They play a lot of guys both ways. Defensively, they’re more or less an even front team. They give you a lot of six-man boxes with one or two high. They run to the ball well and are extremely athletic.”

Kickoff is scheduled for 7 p.m. at J.E. “Hot” O’Brien Stadium in Tallassee.

Eagles have reason to celebrate on senior night

The Goshen Eagles took time to honor their five seniors on Tuesday afternoon before their match against Straughn. The Eagles... read more