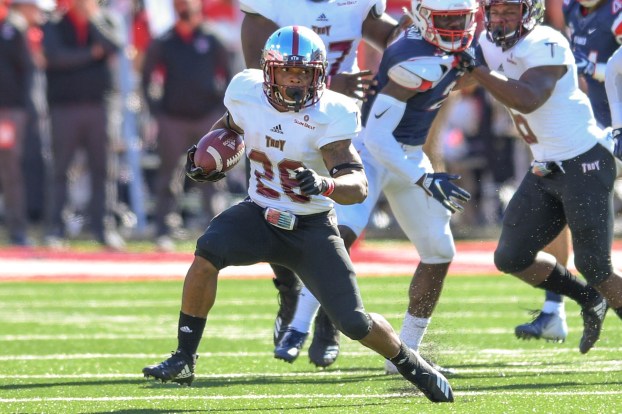 Troy struggles against Liberty in loss

The Troy Trojans had a lengthy road winning streak snapped on Saturday when they fell to Liberty 22-16.

The loss for the Trojans drops their record on the season to 5-2 overall.

There was plenty of disappointment coming from head coach Neal Brown during Monday’s press conference. Brown compared his emotions to how he felt after Troy fell to Idaho on homecoming in 2015.

“Saturday was a bad loss for us and I don’t think that you can put it any other way,” Brown said. “Hats off to Coach (Turner) Gill and Liberty. He had his team ready, they played better than we did and that is why they won. We played bad football on Saturday afternoon. I thought the team was emotionally ready to go. It was not one of those deals where you’re flat and you’re playing a non-league game. I wish you could chalk it up to that, but it wasn’t that.”

Brown felt the Trojans were ready to play on Saturday, but believed it came down to Troy just beating Troy.

Quarterback Sawyer Smith had his first ever start on Saturday. Smith finished the game completing 13 of his 25 passes for 135 yards. He threw one touchdown pass along with one interception.

“I thought from a managing the game standpoint, I thought he did fine,” Brown said. “He has to be better throwing the football. He was a lot better in practice, he’s been better at throwing the football than what he was in every game in his entire career. He did a great job of getting the ball out on the perimeter in some of the run-pass combinations we have, and we just blocked them terrible.”

The offense as a whole struggled getting out of their own way. The offense committed eight penalties, had two turnovers and allowed four sacks.

“Offensively, our staff, led by me, just didn’t do a good enough job to put the team in position to make plays,” Brown said. “It was a lot of Troy beating Troy. That is the last thing I tell the guys when we leave the locker room every week. Our perimeter blocking was the worst I have ever been around. Our pass protection was not good enough when we did throw the ball and then our passing game – if we want to be successful the rest of the season we have to be able to execute in the passing game, which we weren’t.”

In previous losses over the last two years, the Trojans have lost to teams that Brown believed had players in key spots that may have been more talented than his own players. He didn’t feel like that was the case on Saturday.

“Those other teams were really talented and they may have had some areas where they were clearly better than us,” Brown said. “That’s not demeaning to Liberty at all because their quarterback is really good. I think the Pharoh kid played well, but I didn’t feel there were matchup issues in this game like some of the ones we lost. We didn’t play well. We had energy, it was a good atmosphere, we just didn’t play well.”

There is a silver lining for coach Brown. All the goals the Trojans set in the offseason are still in play. With conference play ramping back up this week against South Alabama, the Trojans are eager to turn the page.

“The encouraging thing is I really don’t have a question of how we are going to respond,” Brown said. “We are going to fight and we are going to get back to working. That was a non-conference game; it doesn’t mean it wasn’t important, but all of our goals are still intact.”

On a bright October Sunday afternoon, the town of Brundidge honored a local legend, Joe Leverette the bulldog that served... read more