Troy players and coaches have confidence in Smith 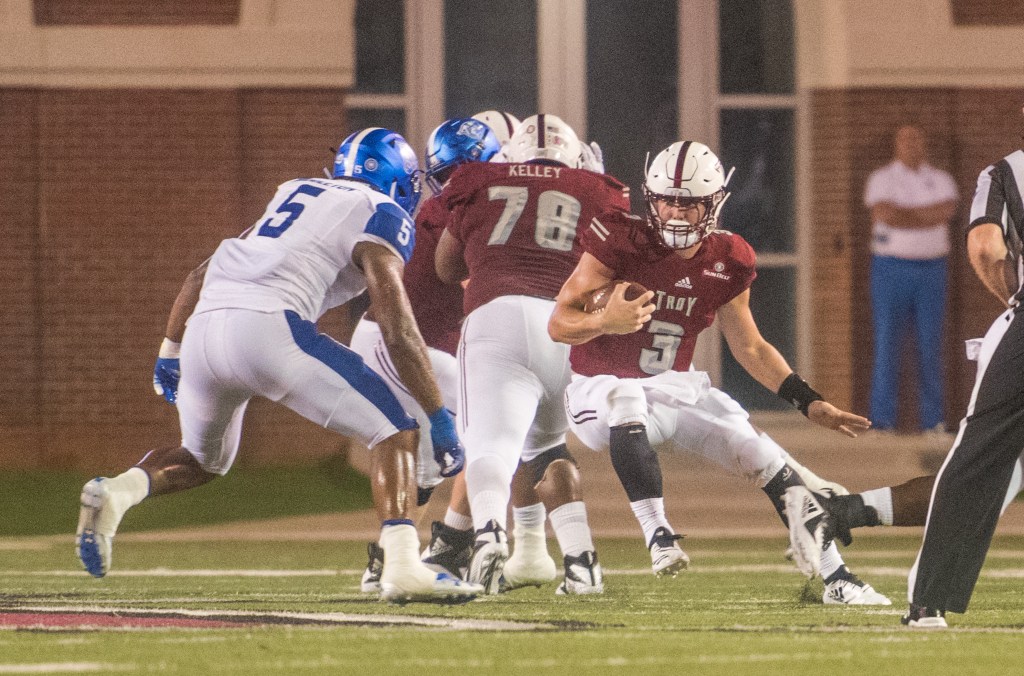 When Troy quarterback Kaleb Barker didn’t return to the field during the second half of Troy’s win over Georgia State on Thursday, speculation quickly spread about the health of the young quarterback. During Monday’s press conference, head coach Neal Brown put an end to the speculation when he announced Barker was out for the year with a torn ACL.

Although shocked and surprised, the Troy players and coaches quickly turned the page to look ahead to this week’s game against the Liberty. The cause behind the quick turnaround? Their confidence in newly named starter Sawyer Smith.

“It hit me by surprise of course, but we believe in Sawyer,” said wide receiver Tray Eafford. “We have been practicing with Sawyer since the spring, since they were battling it out. You couldn’t really tell a difference. We are going to give our full confidence to Sawyer.”

The confidence in Smith stems from the experience he has accumulated during the season. The redshirt sophomore has played in all six games for the Trojans.

“We’ve made a point every game to get him in,” said offensive coordinator Matt Moore. “He’s made some big plays. He had a big run in the Nebraska game, had a big run the other night. He’s done some good things and he’s been involved in the game plan every week.”

Smith has seen a lot of playing time in the second quarter when he has spelled Barker. Because of his extended time so far this season, Moore has confidence in his ability to run the offense.

“We’ve had at least one drive for him every week and we’ve kept him engaged. That’s the good part. It’s not like it’s a guy that’s been sitting over there doing nothing each week and all of the sudden we’re going to throw him in. I feel good about him being able to know the offense and go out there and operate the offense.”

The confidence also comes on the other side of the ball. The Troy defense, who works against Smith every day in practice, knows that he can offer with both his arms and his legs.

“I don’t think it’s going to change much,” said Hunter Reese. “You know, Kaleb was doing great. You hate it for him. It’s a terrible thing. I feel like we have confidence in Sawyer. He’s a gritty guy. He’s not going to back down from the challenge and I think we’ll be just fine. When he’s come in, nothings really fell off. Kaleb’s made great plays. I’m not taking anything away from Kaleb. But Sawyer’s also got in and done great. Obviously, Kaleb’s one of the most explosive players on our offense, our whole team. Missing him is going to be a big deal. But I think Sawyer will be just fine. He’ll step up and get in there and do his thing.”

The Trojans have had a lot of success on the ground over the last two weeks – rushing for 619 yards – with Barker on the shelf, they will be looked at to continue their strong play. Running back B.J. Smith is looking forward to seeing what Smith can do in a full-time roll.