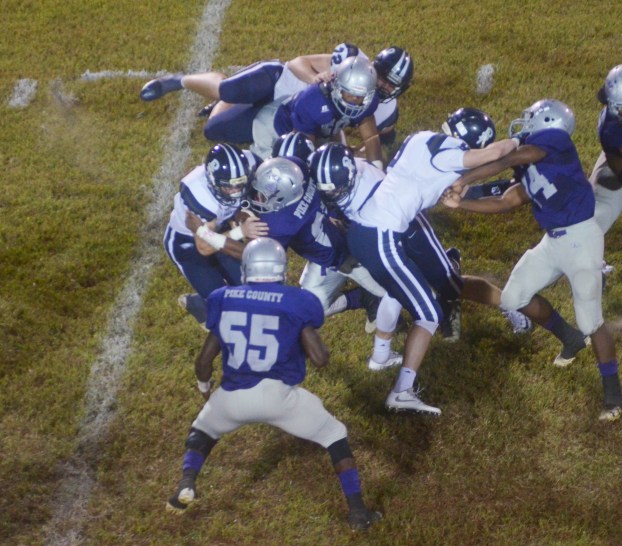 “It was a total team effort,” said head coach Fred Holland. “They (Providence Christian) have been scoring a lot of points and I felt like we faced adversity in the first half. I felt if we could just stay close we would have a chance. We finally made a few plays on offense and defense.”

The win for the Bulldogs gives them an overall record of 5-1, but more importantly they improve to 4-0 in the region, putting them in first place by themselves.

“It feels good to be 4-0,” Holland said. “We had a great week of practice and it showed in the game.”

After the Eagles scored on two of their first three possessions, the Bulldogs pulled away after scoring 18 unanswered points, all of which came in the second half.

“We decided to make some plays,” Holland said. “That’s all it is. I tell the guys all the time you have to get off the field on third and fourth down. We did a lot better job of that in the third and fourth quarter.”

The Eagles scored the game’s first points on their second drive of the game. After a poor snap flied over the Pike County punter’s head, the Eagles took over on the Bulldogs’ 29. Five plays later, the drive ended with a three-yard touchdown run.

The Bulldogs were quick to answer. Playmaking running back Rayshawn Reynolds took a Wilson handoff 39 yards for a touchdown.

The Eagles had a lengthy 10-play drive ending with a three-yard touchdown to go up 14-7 with 7:50 remaining in the half.

Providence Christian flirted with going up by 14 when they took their final drive of half all the way down to the one. On the 15th play of the drive, The Bulldogs stuffed the Eagles short of the goal line, turning the ball over on downs.

The game went into the half with the Eagles holding a 14-7 lead.

“The difference of the game was the big stop right before the half,” Holland said. “It kind of gave us a little momentum.”

The Bulldogs had a lengthy drive of their own to start the second half. They took eight minutes off the clock and marched the ball down the field 85 yards on 13 plays. Wilson found Reynolds in the endzone on a four-yard touchdown completion.

Earlier in the drive, the Bulldogs looked to have come up short on a key third down, but a pass interference call kept the drive alive.

The extra point was no good from 34 yards out, making the score 14-13 with 4:00 remaining in the third quarter.

The Bulldogs scored their 12th unanswered points after another lengthy drive. It took 11 more plays, six of which went to Reynolds. However, it was Wilson who had the biggest play of the drive when he called his own number and dove his way in for a five-yard touchdown run. After a failed two-point conversion attempt, the Bulldogs led 19-14 with 7:17 remaining.

Still without any points since the first half, The Eagles took over on their side of the field with 7:00 remaining in the game. They made it as far as midfield before BenDarius Myhand picked off a pass, giving the Bulldogs possession on the Eagle 22.

Reynolds put the game out of reach with his final touchdown of the game, this time from 9 yards to extend the Bulldogs lead to 25-14.

The Bulldogs will be back in action next week when they travel to take on Slocomb.