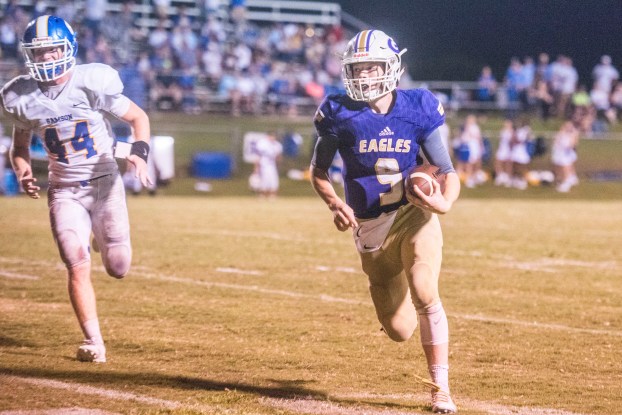 Eagles to play with a sense of urgency tonight against Luverne

The Goshen Eagles hope to snap a two-game losing streak when they host rival Luverne later this evening.

Despite a two-game losing streak, The Eagles (2-3, 2-1) find themselves just one game behind first place Luverne. A win for the Eagles this evening would put them in a tie for the top spot with the Tigers.

“We had a great week of practice with high energy,” said head coach Bart Snyder. “It’s a big game for us.”

The Eagles lost just one regular season game a season ago. This year, with a lot of young faces on the roster, the Eagles are getting a taste of adversity really for the first time.

“Coming off a second loss, that is just something that these guys are not accustomed to,” Snyder said. “They didn’t enjoy that, of course; nobody does. You don’t practice to lose. We are so young. When we looked at the roster, we knew we lost a lot (of players) last year. We are confident with what these guys could be able to do.”

Most of the players, although young, did get playing time a season ago, but for many of them, this is their first taste of quality playing time.

“They did get some playing time; however, they weren’t the starters,” Snyder said. “Defensively we had a little more experience returning than what we had offensively. You can’t replace experience, game experience. We feel each week that we have made some progress.”

The main thing plaguing the Eagles is the thing that a lot of young teams have trouble with: turnovers and penalties.

“Fumbles and pointless penalties,” Snyder said. “You get penalties, but these are penalties that should not be happening. We have come way down from what we started the year with, but we want it to be where there are no penalties.”

With four region games on the schedule, the sense of urgency is high for the Eagles.

“It’s a big game for both,” Snyder said. “Even though Luverne is number two in the state, if we come in and do what we are supposed to do, that is a huge loss for Luverne. We’ve lost to New Brockton and we’ve lost to Georgiana, another ranked team. Luverne will be our third ranked team already. You want to play the best teams in the state. I feel like that is what we accomplished.”

The Tigers have a 5-0 record and they have done it by playing the type of football that has brought them success in the past.

“they’re the same old Luverne,” Snyder said. “They just are better at it. When you have a quarterback for three years, you have confidence in the things you can do. They have strong defensive linemen and strong defensive people that are very athletic.”

The Eagles knocked off Luverne a season ago 27-13. Kick is scheduled for 7 p.m.

Patriots get back into region play against rival Fort Dale

The Pike Liberal Arts Patriots return to region play this evening when they travel to take on the rival Fort... read more