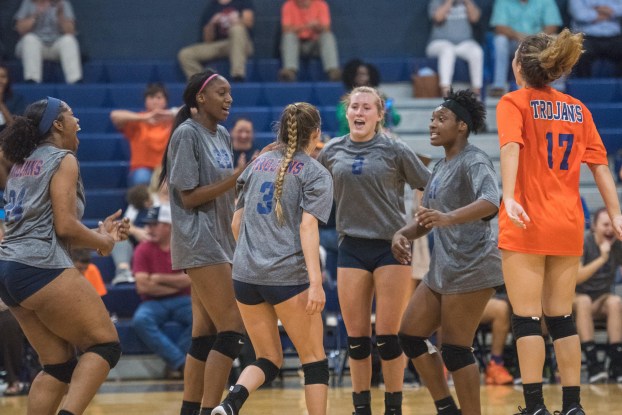 Messenger Photo/jonah enfinger Charles Henderson Trojans celebrate after a point during a match. The Trojans fell in three games to Enterprise on Tuesday night.

Trojans get swept at home against Enterprise

The Charles Henderson Lady Trojans volleyball team fell in straight sets to the 7A Enterprise Wildcats on Tuesday night in Troy.

The Trojans went up against an Enterprise team that is currently 26-3 on the season.

“Enterprise is a great team,” Kirkpatrick said. “In order for us to continue to get better, these are the kind of teams that we have to challenge ourselves to play against. I’m proud of our team. I thought we battled and competed. Enterprise is just better than us.”

Enterprise is a strong program that they have built over the years, something that Kirkpatrick hopes to build in the upcoming years.

“They have a great coach who has a really good program,” Kirkpatrick said. “She runs a club out of Enterprise that a lot of her girls play on. They are locked in as volleyball players. They have a lot of talent and experience. Again, that is the level we are trying to get to.”

On Tuesday, the Trojans started to show what they have been working so hard on in practice.

“We started really doing a lot of the basic stuff we have been working on,” Kirkpatrick said. “We have some cleaning up to do, kind of unforced errors. We are heading in the right direction even if the scores don’t show it.”

There is no way Coastal Carolina is going to kick it anywhere near Marcus Jones, right? That was the question... read more