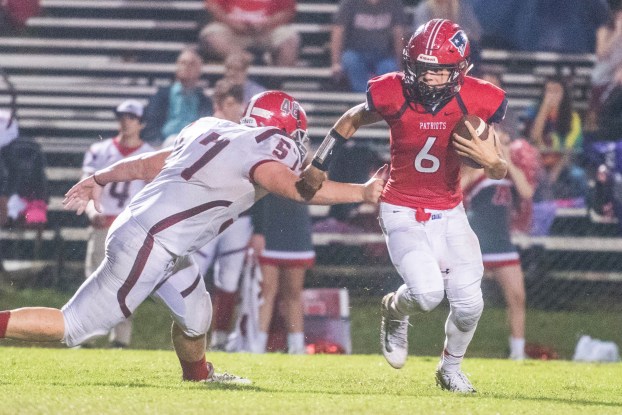 The Pike Liberal Arts Patriots had reason to celebrate after they knocked off Abbeville Christian 65-13 on homecoming Friday night.

The win for the Patriots improved their record on the season to 7-0.

“We did a lot of good things,” said head coach Gene Allen.  “We played well. I have to watch the film, but I was pleased with most of the game. We let up a couple big plays that I wasn’t really pleased with. It was fun. It was a good homecoming night.”

Seven different Patriots put points on the board in the blowout win. The lopsided score allowed Allen to empty his bench, giving younger players valuable experience.

After a quick three and out by the Generals, Patriot running back Chip Faircloth took a handoff 52 yards for a quick touchdown to put Pike up 7-0.

The Patriot defense got into the act after a Faircloth fumble put the Generals on their own one yard line. The defense broke through the line and picked up a safety to put the Patriots up 9-0.

The Patriots scored on three straight possessions to close out the first quarter. Quarterback Jade Sikes called his own number and scored from eight yards out. Junior Davis Allen scored back-to-back touchdowns on runs of 18 and 27 yards, giving the Patriots a 30-0 lead heading into the second quarter.

After an interception ended their previous drive, Drew Nelson ran one in from 14 yards increasing the Patriot lead to 37-0.

The Patriot defense let up their first big play during the Generals next drive and it came on a 66-yard touchdown run, giving Abbeville Christian their first points.

The Patriots quickly answered when Trevor Barron hauled in a Nelson touchdown pass from 11-yards out to give the Patriots a 43-7 lead after the extra point.

The Generals scored the first points of the second half when they scooped up another fumble and ran it back for a 64-yard touchdown bringing the score to 44-13.

The Patriots finished off the game with a 54-yard touchdown run by Jade Sikes, a 23-yard run by running back Jackson Senn and a 15-yard fumble return by Levi Sikes.

The Patriots return to region play next week when they travel to Greenville to take on rival Fort Dale.

“Next week is big,” Allen said. “It’s a region game, but it’s Fort Dale, who is a big rival. We need to try and go 3-0 in the region. We are 7-0 right now, but you go down there and lose next week it puts a damper on everything. We have to come out ready.”

Bulldogs keep rolling with a 20-14 win over Abbeville