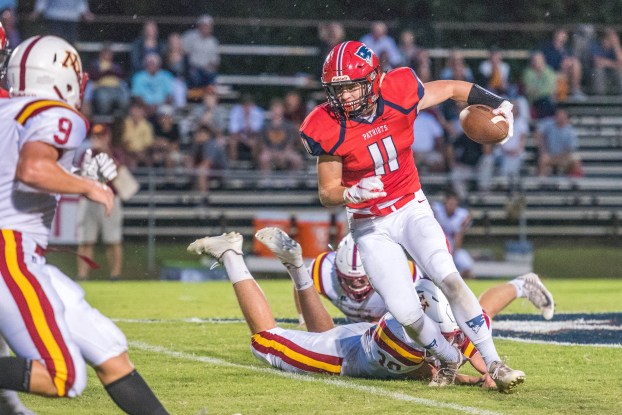 Chip Faircloth runs the ball for the Patriots

With a perfect 5-0 record on the season, the Pike Liberal Arts Patriots step out of region play to take on a familiar face in Lee-Scott Academy this Friday night.

The Patriots played their biggest game of the season up to this point last Friday night and walked away with a 10-8 win over Macon-East.

The Patriots stormed out to a 10-0 win, but later had to face adversity when senior running back Cody Hollis went out due to injury. After a late defensive stand, the Patriots held on and beat the Knights.

“It was a very big win for us,” said head coach Gene Allen. “Cody got hurt and we found out Davis (Allen) couldn’t play on Thursday. It put us in a bind moving people around and putting them where they need to be. I thought the kids stepped up and did a really good job.”

Hollis injured his shoulder and Allen believes he could be out at least the next two weeks. Allen hopes to get him back when the Patriots return to region play against Ford Dale on October 5.

“He is getting better,” Allen said. “He is probably going to be out for a couple of weeks. We don’t want to bring him back before he is ready. We don’t want to lose him for the season. We think it will be at least two weeks.”

Quarterback Jade Sikes was one player that stepped up in Hollis’ absence. After the injury, Sikes moved to running back and picked up some key yards for the Patriots in the second half.

“He did a really good job at helping us keep the ball away from them,” Allen said. “He did a tremendous job the other night. He stepped it up and played hard. He took over the leadership role. He has been big for us all year.”

Lee-Scott rides into Troy with a six-game winning streak over the Patriots. Even though it is not a region game, the Patriots hope to end a lengthy losing streak against the Warriors.

“Lee-Scott has had our number that last few times we played,” Allen said. “We kind of owe them so hopefully we can come out and play like it’s a region game. We are going to try and build on what we did last week and hopefully get better.”

The year’s version of Lee-Scott is different than year’s past. They enter the game with an 0-4 record including a 40-2 loss last week to Morgan Academy. The Warriors offense, which is known for its powerful running style, has been forced to mix things up a bit this season under long time head coach Robert Maddox.

“They lost a lot,” Allen said. “Their numbers aren’t very good even though they’re the largest school in the state. Robert is trying to find out what they need to do. They came out in spread the first few weeks. They didn’t like it and last week they went back to the wishbone.”

One thing that hasn’t changed is their physicality.

“If nothing else, it helps them control the ball and the clock a little bit,” Allen said. “They have always been really good at that and being physical. It’s going to be a challenge for us.”

County Road 2290 in Henderson is under repair as part of a federal resurfacing  project for the road. Commissioners decided... read more