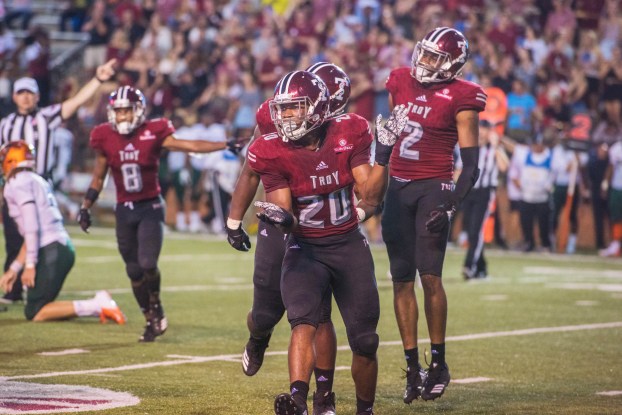 roy running back DK Billingsley celebrates after a play. The Trojans knocked off the Rattlers 59-7.

The Troy Trojans hit the road for the first time this Saturday to take on the Nebraska Cornhuskers.

The Trojans (1-1) look to earn their latest upset win over a Cornhusker team that is coming off a 33-28 loss to Colorado last Saturday afternoon.

It will be Troy’s first game against a Power 5 opponent since they knocked off LSU last season. This year, the Trojans have an eye on winning, but the ultimate goal hasn’t changed.

“We want to win the game and we are playing the game to win, but we have to continue to get better,” Brown said. “That was my message to the staff last week. The way our season starts out, we play seven games in a row before we get a break, which is a really challenging early season schedule.

“We have to make sure we play good fundamental football; if we do that, I think we will have an opportunity. They are a high-level opponent. They provide some major challenges for us on offense and defense.”

On the offensive side, the Cornhuskers are weighing their options at quarterback after Adrian Martinez came up a bit lame during the loss to Colorado.

“I’m not sure who is going to play, so we will follow that (this week) and get ready for both,” Brown said. “Martinez is a dynamic runner for a true-freshman, I thought what he did last week was special. The backup, you’re not a backup quarterback at Nebraska unless you can play. I’m sure that if (Matt Musker) has to play, he will perform at a high level.”

It could be a game-time decision for head coach Scott Frost and the Cornhuskers.

In all, the Cornhuskers put up 565 yards of total offense last weekend including 329 on the ground.

“I think Scott Frost does a tremendous job of putting his guys in position,” Brown said. “They are a big, physical offensive line. We are going to have to do a really good job playing with technique on the defensive line because they are going to outweigh us in almost every position.”

The Trojans offensive line – which has been working on building depth – will be going up against a big and physical Cornhusker defense.

“They may be the biggest defense that I have ever played against and that’s going back into the SEC and Big 12 days as well,” Brown said. “Across the board they are 290-plus, they don’t have a linebacker under 230 pounds, they’re just really a big unit. They held Colorado last week to just 44 yards rushing.”

The Troy Trojans hope the running game continues to improve this Saturday against the Nebraska Cornhuskers. The Trojans have replaced... read more