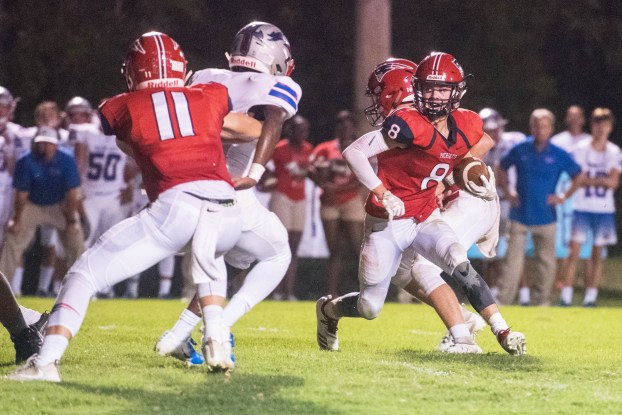 The Pike Liberal Arts Patriots overcame injury and a tough Macon East team in a 10-8 win over the Knights on Friday night.

The win catapults the Patriots to 5-0 overall and 2-0 in region play.

“It was a very physical game,” said head coach Gene Allen. “We found out today that Davis (Allen) can’t play (due to injury) and Cody got hurt, but we had people step up. Jade (Sikes) picked up his game and did what he had to do. We did what we had to do to get the win and our defense was lights out.”

Both teams entered the game undefeated, but it was the Patriots that remained on top of the region on Friday.

“It was the biggest game of the year,” said senior linebacker Max Copeland. “It’s a region win and it was a rivalry game. It really came down to pride. We gave up a safety and we told the guys to have a will to win and not let them score again.
Senior running back Cody Hollis left the game with an apparent shoulder injury and was taken to the hospital. Sikes and freshman quarterback Drew Nelson were left to pick up the slack.

“Cody is big for our team,” Copeland said. “Cody is a leader and puts up big numbers. Him going down really hurt, but we had guys step up. Jade did a good job at running back. Drew did a good job at quarterback. That’s the good thing about this team. We love each other and when one guy goes down, the next guys steps up.”

It took about 20 minutes of game action before more points were put on the board.

Both offenses combined to have six drives that lasted four plays or less.

After the sixth drive, Patriot kicker Scott Taylor Renfroe drilled a 28-yard field goal, extending Pike Liberal Art’s lead to 10-0 with 3:06 remaining in the half.

Like the Patriots did in the first half, the Knight’s scored quickly to begin the third quarter. Just over a minute into the quarter, Cephus Cleveland rumbled his way for a 51-yard touchdown to bring the score to 10-6 after a missed extra point.

After a Patriots three-and-out, Pike Liberal Arts was forced to punt. The snap sailed over punter Graham Wilkes’ head for a safety, bringing the score to 10-8 with 2:03 remaining in the third.

With just under three minutes remaining in the ball game, the Knights got possession on their own 5. They drove the ball to their own 31-yard line before turning the ball over on downs, giving the Patriots the win.

The Patriots will step out of region play to host Lee-Scott next week beginning at 7 p.m.

“Region is important, but we play every game to win,” Copeland said. “There is no game that this team goes into that we are not playing to win.”

Parents and students of Troy City Schools came out to meet and greet with community businesses and organizations and learn... read more