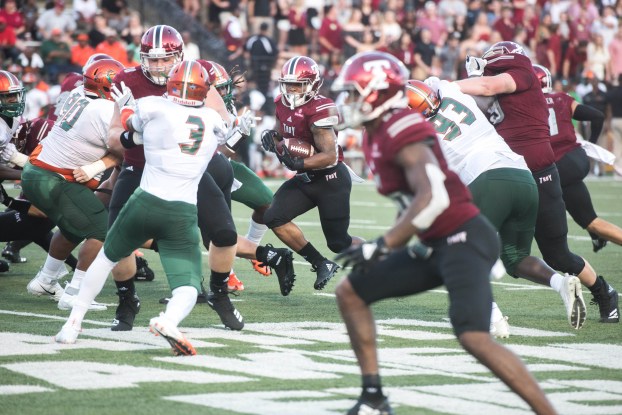 Messenger Photo/Jonah enfinger Troy running back B.J. smith runs the ball for the Trojans on Saturday against Florida A&M.

The Troy Trojans hope the running game continues to improve this Saturday against the Nebraska Cornhuskers.

The Trojans have replaced two bell cows from last year’s ground attack that included Jordan Chunn and Josh Anderson. The Trojans are still trying to find their go-to running back as they head into week three.

In week one, the Trojans rushed for 124 yards against Boise State. They upped their total on Saturday when they rushed for 292 yards.

Jabir Daughtry-Frye and B.J. Smith led the way with 71 yards each, while DK Billingsley followed up with 64 yards.

“I thought we established the run game early,” Brown said. “Jabir started the game and I thought he had some explosive runs, which he is capable of. What I am excited about is he is going north and south. He is not just getting the ball on the perimeter. I thought B.J. bounced back. I thought he ran the ball real effectively.”

Troy was without junior running back Jamarius Henderson after he was suspended prior to Saturday’s game after violating team rules.

With the game already decided, Billingsley was able to play for much of the second half.

“I was pleased the game worked out the way it did,” Brown said. “He can not only get some carries but some real meaningful playing time. He was a little wide-eyed early and kind of ran into the back of the O-line a few times. The more he got a feel, the better he played. He redshirted last year, so it’s been a while since he played in a live game.”

The Cornhuskers allowed just 44 yards rushing in their loss to Colorado last week. Despite those stingy numbers, Brown expressed the importance of establishing a run game.

The Trojans are 0-3 all-time against the Cornhuskers. They look to snap that streak this Saturday when they travel to take on Nebraska at 11 a.m.