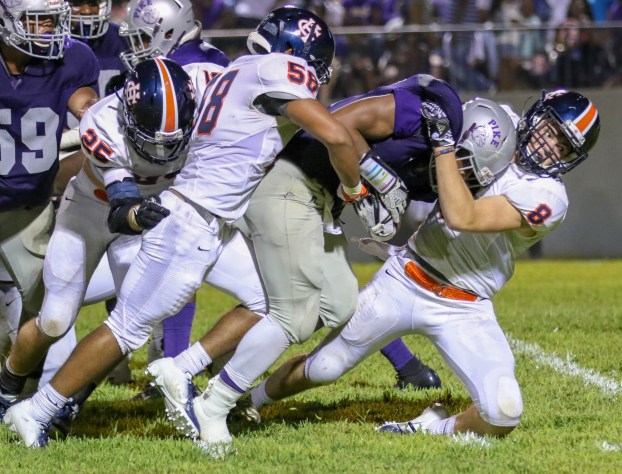 Messenger photo/Dan Smith Zeke Caldwell (58) and JB Sanders (8) team up to take down a Pike County ball carrier during a football game on August 24.

Region opener: Trojans back on the road against Rehobeth

Coming off a loss to the 7A Enterprise Wildcats, the Charles Henderson Trojans open up region play this Friday night on the road against Rehobeth.

The Trojans (0-1) found themselves down by as many as 28 points last Friday night before mounting a comeback. They scored 21 unanswered points in the game’s final minutes to pull within seven, but They couldn’t get any closer.

“We wanted to win the football game. That is always our goal,” said Charles Henderson head coach Brad McCoy. “We did learn about this group that we have this season. I was extremely proud of their resilience throughout the rain and throughout adversity. There was simply no quit.”

The Trojans attempted to come out of the gates quickly in the game. DQ Toney threw a deep pass on the opening play of the game that sailed just beyond his receiver’s grasp. Over the next three quarters, the Trojans fell behind by too much and ran out of time.

“Did they come out and hammer us? Absolutely, but we were not going to sit back on our heels and let that transpire,” McCoy said. “We had an approach that we wanted to bring to the game and I think our guys went out and showed it. We were able to move the ball throughout the game. We had our challenges, but I am still proud of our overall effort.”

Despite the loss, McCoy believes his football team discovered how good they could be if everything clicks.

“I think our guys realize that we have a very capable football team that can play with anybody,” McCoy said. “I think our 11 are as good as most 11 in 5A to 6A to 7A that we are going to play this year.”

In the early stages of the season, the Trojans have been tinkering with their offense to determine who would be the best fit at quarterback between Toney and Pooka Jones. On Friday night, Toney got the majority of the snaps, while Jones brought the Trojans back with strong play in the fourth quarter.

“Pooka did a great job,” McCoy said. “He came off the bench in the fourth quarter and we moved DQ out to the wide-out and that really seems to open up the offense even more. DQ did a great job throwing the ball too. That’s the challenge we’ve got as coaches is to make sure that we set our offense up to be productive when either one goes in.”

Jones finished the game completing 7 of his 10 passes for 140 yards.

“For him to come off the bench and make the throws that he made really told us a lot about where Pooka is as a player after not playing after two years,” McCoy said. “He has been a great example of working, sitting in the background and waiting for his opportunity.”

Toney finished his night with 126 yards of passing. Both quarterbacks will see time under center on Friday night.

This week the Trojans jump into region play on Friday when they take on Rehobeth in the regional opener. The Trojans knocked off the Rebels a year ago 28-9 in Troy. Despite being 11-1 against the Rebels in their last 12 meetings, McCoy believes Rehobeth is always a formidable opponent.

“Rehobeth has always been a really scrappy bunch,” McCoy said. “When you talk about a team that never goes away, Rehobeth has been that type of team. Unfortunately we have played our worst football, for whatever reason, against these guys.”

The Rebels come in scuffling at 0-2 this season after losing to Ashford and Dothan by a combined 67 points. The Rebels scored just seven points in both losses.

Despite their struggles, the Trojans are expecting a tough challenge on the road.

“They play really good at home against us,” McCoy said. “We know it’s going to be a challenge. We are excited about having an opportunity. If we go out and play as hard as we did this past week, then we have a chance to go 1-0 in the region.”

On the defensive side of the ball, the Rebels have allowed 78 points so far this season.

“Defensively, they will line up mainly in odd fronts with three down linemen,” McCoy said. “They move those backers around to try and make it multiple. They try to bring extra guys and play a three-deep zone coverage on the back end. I think with us having the ability to throw it like we can, then we might see two-high safety looks.”

Kickoff is set for 7 p.m. at W.F. Andrews Field in Dothan.

The Madras Maiden, a restored B-17 bomber, takes flight over Montgomery Monday. The plane is in town for an airshow... read more