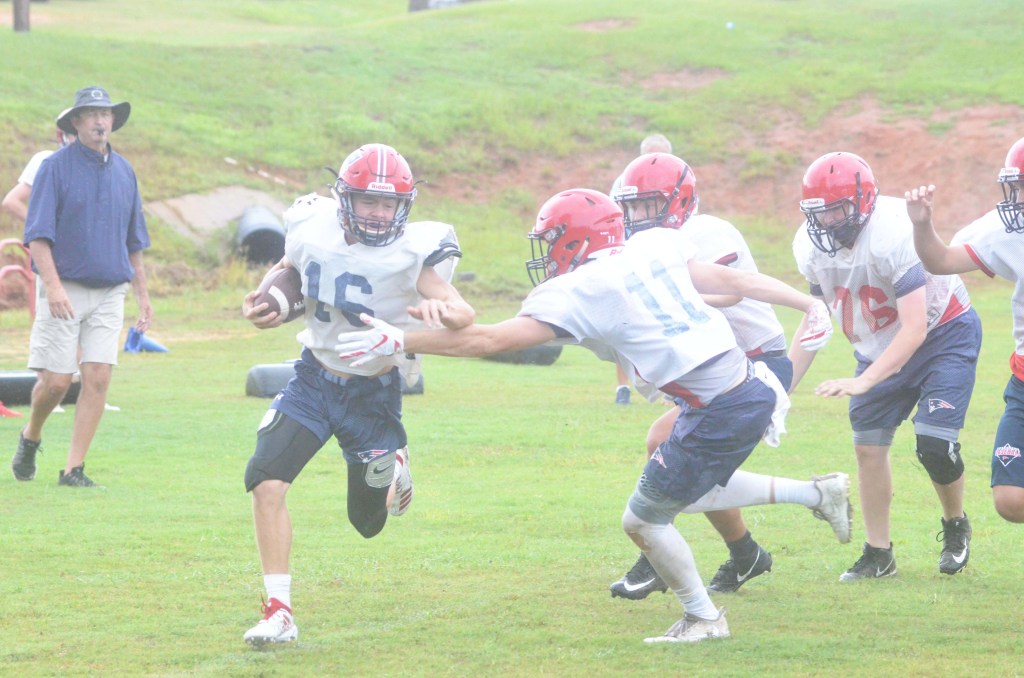 At long last, high school football is back. The Pike Liberal Arts Patriots kick off the high school season when they welcome in the Morgan Academy Senators this evening for the season opener.

It’s been a long hot summer that featured long practices, workouts and 7-on-7 tournaments. Now It’s time to strap on the helmets and shoulder pads.

“Football season always brings excitement,” said head coach Gene Allen. “I have been doing this for a long time and there isn’t a better time of year to me than high school football kicking off.”

Max Copeland, a senior linebacker for the Patriots, will run out of the tunnel and onto the field for his final season opener this evening.

“I am really excited,” Copeland said. “We are tired of hitting each other, so we are ready to see Morgan and see a different color jersey. Out here, all the work we put in comes together in this first game. Hopefully the stands will be full and loud. It’s going to be fun.”

The Patriots will kick off the season at home for the second consecutive season. They beat Kingwood Christian at home a year ago 47-8.

“I am anticipating us having a real big crowd,” Allen said. “There has been a lot of excitement this year going around. The excitement level seems to be really good. I know we have a lot of students that are involved. I hope we will have a lot of the student body here that isn’t involved with the festivities.”

After all the hard work this summer, The Patriots feel like they are ready to put on a good show starting this evening.

“I think we have gotten a lot of work in,” Copeland said. “We put in a new defense this year. I think it’s really going to help us run towards the ball. We have a lot of excitement on defense and a lot of hard-hitters. I’m ready to see how it all works out.”

“We are going to take it one game at a time,” Allen said. “We worked hard. We don’t have a lot of depth and we are going to see tomorrow night if we have some kids that are going to have to step up. I am excited. They have done a tremendous job.”
The Patriots will have three non-region games to open up the season. Although winning is the ultimate goal, Allen is going to use the time to further get ready for the region opener against Northside Methodist in week 4.

“We are going to do things a little different than we would if it was a region game,” Allen said. “We aren’t going to run everything. We will keep adding stuff as the year goes along. We are going to play two or three quarterbacks I’m sure. We have three games before we get into regional play. By the time we get to regional play we want to make sure we have all the pieces where we need them.”

“I know they are going to be similar to us,” Allen said. “Last year was a close game. We felt like we kind of gave it away. Morgan has beaten us the last two years, so hopefully our kids will come out ready to play.”

Kickoff between the Senators and Patriots is scheduled for 7 p.m.

WELCOME BACK: Troy students return to campus for first…