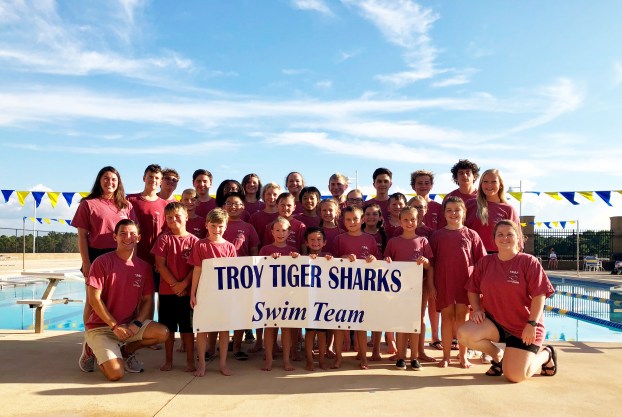 submitted photo The Troy Tiger Sharks will travel to Dothan to participate in the District Swim Meet beginning on Saturday.

The summer swim season is winding down, but the Troy Tiger Sharks have an important date on Saturday when they swim at the District Swim Meet in Dothan.

After a brief break for the Fourth of July holiday, the Tiger Sharks immediately hit the pool to begin preparations for the meet.

“We got straight to work,” said head coach Nicklaus Chrysson. “We have been working hard two hours every day. We look forward to going Saturday.”

Troy’s last meet came on June 26, but it was abbreviated due to poor weather in the area. Despite the lack of meet experience in the pool, coach Chrysson believes his swimmers will be ready to go come Saturday.

“I think with the Andalusia match and the beginning of that match they pretty much have it grasped,” Chrysson said. “We will have every coach there and their parents will be helping them so I don’t think it will be a problem.”

At the current stage of the summer, Chrysson and the coaching staff have guarded against muscle fatigue as they head to district. All this week they have backed off a bit in order to make sure they are ready to go.

“We don’t want physical fatigue right before the district swim meet,” Chrysson said. “We have been tapering off this week. I don’t think many of them have mental fatigue, but we are definitely trying to ward off physical fatigue.”

Each swimmer at the district meet will have the opportunity to advance to the swim meet in Dothan. Each swimmer will have a qualifying time that would automatically advance them to state. Each swimmer can also advance by finishing in the top four in their event.

Chrysson is confident in a high number of his swimmers moving on to state.

“I am probably more confident this year than I have been any other year,” Chrysson said. “I would probably say more than half will go.”

Pike travels for second 7-on-7 tournament

The Pike Patriots will participate in their second 7-on-7 Tournament of the summer when they travel to play at Meadowview... read more