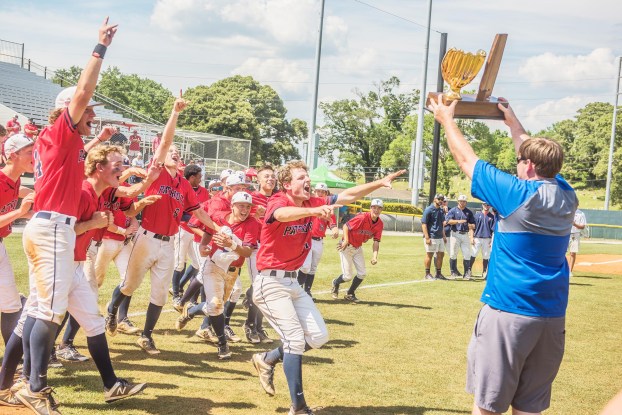 Messenger Photo/Jonah enfinger The Pike Patriots storm the field to claim their state championship trophy in May. The Patriots were recently named the National Athletic Association of Private Schools Division 3 National Champions.

There may be another banner flying high on the Pike Liberal Arts campus when school gets back in session in a few weeks. The Patriots baseball team was named the National Athletic Association of Private Schools Division 3 National Champions.

The announcement came in the wake of the Patriots claiming their second-ever state championship in May.

“That senior class and this group of kids accomplished so much this year,” said head coach Allen Ponder. “That’s just another big one for them. State championships don’t come around that often. They are very hard to achieve. To win something bigger, to win a national championship is just another accomplishment for them. They earned it and deserve every bit of it.”

The Patriots finished the season a with a 35-5 overall record. After getting by Tuscaloosa Academy in the semifinals, the Patriots matched up with the 22-time state champion Glenwood Gators for the second consecutive season.

The Patriots knocked off the Gators in two-straight games to claim the championship.

“I talked to some of my kids yesterday and they are really excited about it,” Ponder said. “It’s a huge accomplishment. The state championships are rare and the national championships are even more rare. For those kids to accomplish something like that is very exciting for them and the community of Troy.”

Ponder believes that the state championship, along with the national championship, could positively affect the program for years to come.

The Troy Belles wrapped up another state championship with a 10-0 win over AUM on Monday night at the Sportsplex.... read more