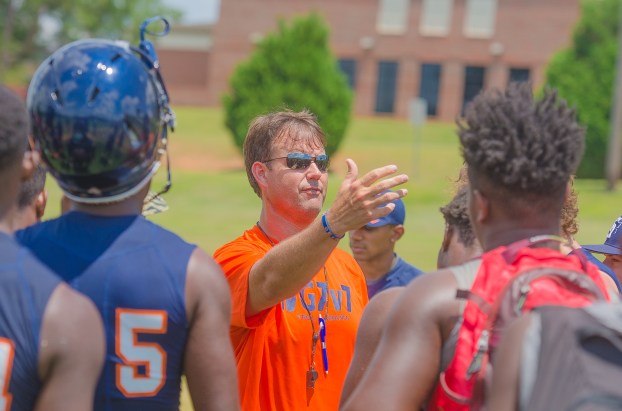 Charles Henderson hosted the Wiregrass 7-on-7 Tournament at Troy University on Thursday afternoon.

Some of the state’s top talent came to Troy for the annual camp. Some of the 20 teams that attended included: Charles Henderson, Pike Liberal Arts, Prattville, Daphne, Phenix City and Greenville.

Charles Henderson picked up three wins in the tournament, including the first round of the single-elimination tournament. Their day came to a close when they fell to Holtville 21-19.

“It was a long day,” said head coach Brad McCoy. “We had four games in pool play and we won three of them. We lost to Holtville. We had a couple of missed opportunities – an interception that we dropped and we threw an interception.

“At Auburn two weeks ago, we won one ball game and we moved in today’s tournament and won three. I saw improvement and I am proud of our skill guys that got a ton of work.”

Thursday’s tournament gave Charles Henderson the ability to get their two quarterbacks work.

“DQ Toney is still our number one at quarterback,” McCoy said. “Pooka Jones was a quarterback that won 8 games in his last year of middle school ball. They probably split reps 50-50 today. Both had strong arms and I thought both of them showed progress and they showed improvement in their reads and getting the ball quicker.”

The Pike Liberal Arts Patriots went up against some of the state’s best that included many 5A, 6A and 7A schools. They finished the tournament 0-5, but head coach Gene Allen thought it was a good experience.

“It was a good learning experience,” Allen said. “I thought our guys played hard. We made several lineup mistakes and blew some coverages defensively. I know we got real hot and tired playing on the turf against teams that were platooning.”

Prattville and Daphne met in the championship on Thursday morning and it was the Lions that prevailed over the Trojans 29-28.