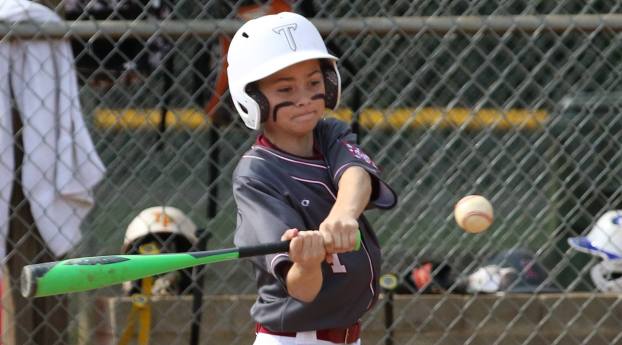 Messenger photo/Dan smith Troy and Enterprise will meet in the AA, AAA and Ozone District championships this evening at the Troy Sportsplex.

Troy and Enterprise both have long and rich traditions on the baseball diamond. There is a natural rivalry between the two towns that has lasted for years. The rivalry will be renewed this evening at the Sportsplex when the two will meet in three different best-of-three series to decide the district championships.

AA 8U, Ozone and AAA leagues will all begin a series tonight to decide the district championship.

“Both towns have good programs,” said Troy Parks and Recreation Assistant Director and Youth Sports Coordinator David Dickey. “Most of the time it comes down to Troy and Enterprise when it comes to who advances to state. Both have good kids and athletes, so most of the time the road to state or the World Series comes through Enterprise.”

The Troy Ozone team coached by Josh Prestwood believes that when the two towns meet, there is a different feeling in the air.

“A lot of the kids play travel ball against Enterprise,” Prestwood said. “They have been playing against each other for six years. It’s a little tense because it’s almost written down that those will be the two teams that will play for a championship. It makes it a little more exciting when you know that is who you are going to play.”

Troy’s AAA coach David Nelson has been coaching the game for the past few years and he believes it is a natural rivalry that was born because of the two towns’ ability to play the game.

“It’s become a rivalry by default,” Nelson said. “It’s two solid recreation departments that consistently put good teams on the field. As a result, we usually see each other in the championship games in district tournaments.”

The 8U Troy team knows all to well the kind of talent that Enterprise has at their exposure. Coach Andrew Davis’ team has had their summer come to an end the past two seasons at the hands of Enterprise.

“It’s always a tough game,” Davis said. “The past two years they have pretty much owned us. They have put us out the last two years. We are looking forward to this game and hopefully we can continue the success we have had.”

It’s not just the players, but the coaches know the rivalry and a series win would mean the world for them. “It would mean a lot to the coaches,” Davis said.

Each team will play the first two games of the series this evening beginning at 6 p.m. with game two to follow shortly after. If a game three is necessary, it will be played on Saturday.

The fans usually flock to the ballpark when the two towns meet and Dickey envisions the same thing to happen tonight.

“They always bring a good crowd and Troy always has a good crowd,” Dickey said. “We are looking for a big crowd to be here to cheer them on.”

Dickey believes all three series will be tight and thinks that the tournament will bleed into Saturday.

“I would be surprised if it was a sweep,” Dickey said. “Somebody will split. I hope of course that Troy comes out on top, but I know they (Enterprise) has some good teams and players too. We are looking forward to seeing some good ball.”

The Troy Tigers Sharks were in the pool for their first official swim meet of the season on Tuesday afternoon... read more