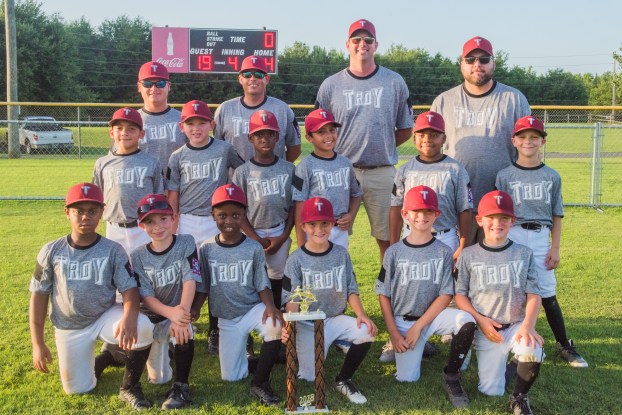 The Troy 8U All-Star team claimed the district championship on Tuesday night after they knocked the Enterprise Nationals 19-4.

“I am really proud of the kids,” said head coach Troy Jinright. “They have worked really hard in the last two and a half weeks. We have played some tough opponents with kids older than us to get ready for this tournament. They have done everything we have asked of them in practice and I am happy to see them reap the awards.”

The offense scored 19 runs, but the defense held Enterprise to just four runs.

“That is one thing that we work on in practice is our defense,” Jinright said. “The kids get mad at me in practice because they want to hit, but I tell them we are not hitting until we look good on defense. We can score 20 runs, but if we can’t keep the other team from scoring 21, we aren’t going to win.”

Troy got on the board in the top half of the first inning. They sent six batters to the plate and scored the first two runs on a single by Carlos Valencia.

Troy attempted to break the game wide open in the second, when 12 batters came to the plate. Colton Campbell, Wyatt Austin, David Riley Sanders and Drayton Wingard all drove in runs with hits in the inning while Colt Taylor and TJ Griffin got runners in on defensive miscues. By inning’s end, Troy held a 9-0 lead.

After Enterprise scored their first run of the game in the bottom of the second, Troy got three back and went up 12-1. Troy got hits by Dru Jinright, Campbell, Jamareon Burney and Colt Taylor. Jinright, Sanders and Austin all touched home to stretch Troy’s lead to 11 at 12-1 heading to the bottom of the third.

Enterprise scored two more runs in the third, but in the fourth Troy blew it open by having their second seven-run inning. Sanders, TJ Griffin, Drayton Wingard, Campbell, Sanders, Tyrin Toney and Austin all reached base and touched home to give Troy a 19-4 lead.

Troy will travel to Oxford to play in the state tournament beginning on July 5.

“We are going to try and get some practice games in and we are going to look and find some tournaments to play in,” Jinright said. “I hope to go to state and bring it home. We finished runner-up last year; we have one more game to win this year.”