Ozone Rookies clash with Eufaula to open up tournament 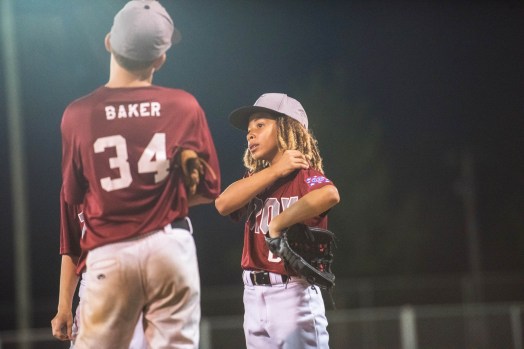 Messenger Photo/Jonah enfinger KaNeil Lewis talks with his teammates during the Ozone Rookies game against Eufaula on Thursday night. 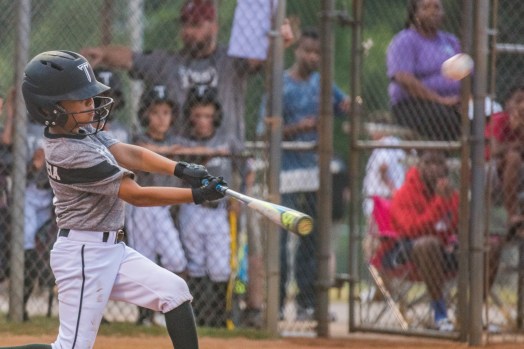 The Troy Ozone Rookies kicked off their district tournament against Eufaula on Thursday night. Troy pulled away late and won 10-4.

Eufaula got off to a quick start on Thursday night. They sent seven batters to the plate and scored the game’s first three runs in the opening inning. Eufaula tallied the three runs on just one single and a walk. Troy also committed two errors in the frame.

Troy climbed back in the game in their half of the first. Keldon Singleton ripped a two-run single to right field to put Troy to within one at 3-2. Cade Edwards was thrown out at the plate on a wild pitch to end Troy’s threat.

Troy took the lead in the bottom of the second inning thanks to five walks by the Eufaula pitchers. Blake Lowery came around to score on a wild pitch to tie the game and Connor Jones scored on a bases-loaded walk to give Troy a 4-3 lead.

Eufuala was aided by walks in their top half of the third. Troy walked four batters and that turned into the tying run when Hayden Adamson walked a batter with the bases loaded.

Jordan McBryde got the start for Troy. McBryde pitched into the third inning before giving way to Adamson in the top half of the third.

Head coach David Nelson’s squad got their district off to a hot start with a strong showing against Greenville in Luverne on Thursday night.

Carter Nelson got the start for Troy and lasted 2.2 innings. Peyton Elliot came in and pitched 1.1 innings of scoreless baseball.

“They threw strikes and let the defense work behind them,” coach Nelson said. “We played well on defense. Peyton Elliot got the scoring started for Troy in the first inning with a shot to the fence.

“We did good at the plate,” Nelson said. “We had consistent, quality at-bats by everyone. We showed good discipline and patience at the plate. We drew several walks and hit it when we got strikes.”

Troy will be back in action today at 8 p.m. against a team to be announced.

The Troy Rookies won in dominating fashion over the Enterprise Americans to begin play in the District 9 Tournament at the Sportsplex.

The win for Troy advances them to the winner’s bracket, where they will play on Saturday beginning at 7:30 p.m.

Troy finished with 17 hits in the win. Connor Sanders, Dru Jinright and Mark Griffin each had three hits.

The Troy 6U All-Starts picked up a shoutout win over first-year Hartford to begin the district tournament in Luverne on Thursday night.

“I am really proud of the team and their effort tonight,” said head coach Scott Ross. “We hit the ball pretty good. We had 20 hits as a team. Most everyone on the team got a hit. Everyone made contact with the ball at this age that is huge. This is their first year participating in this age group so it’s a learning experience for them. They played hard.”

Cole Cleveland stuck out on defense for coach Ross.

“He had several balls hit at him tonight that he fielded and made good throws,” Ross said.

Bradunn Golden, Noah Houlton and JD Vaughn all had big hits for Troy in the win.

Troy will now play Eufaula on Friday beginning at 7:15.

“I told the kids every game you win the next one is going to be harder,” Ross said. “We play Eufaula tomorrow night (Friday). We played them in the practice tournament last weekend and they were kind of throwing it around a little bit, but they have a competitive team. If we play like we are capable of playing I think we have a chance against anyone.”

The Troy 8U team moved into the winner’s bracket with a win over Luverne on Thursday night. Troy finished with a total of 15 hits. Landon Flowers hit two home runs in what was a two-hit night. Greyson Mathews, Dutch Adams, Pierce Gill and Ty Hughes all had two hits. Greyson also hit a home run.

Troy will be back in action on Saturday.

In other action  the Dixie Boys 15U team won their opening round game 10-3 against Taylor Rehobeth.