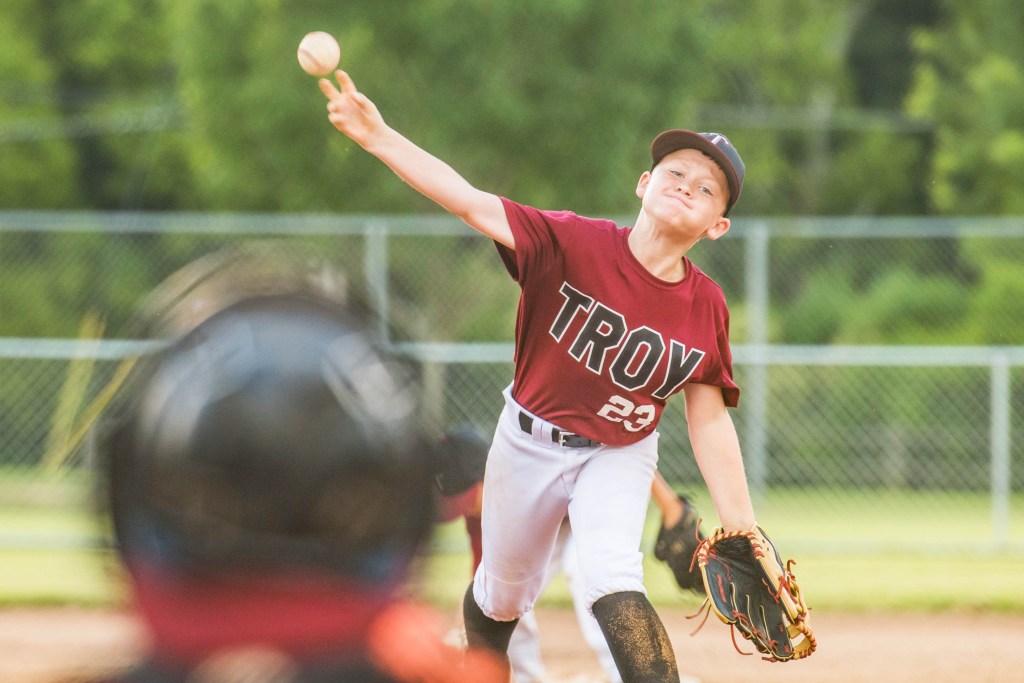 Jeremiah Davis (23) delivers a pitch for the Troy AAA Rookie Americans on Thursday night at the Sportsplex.

The Troy AAA Americans were the first local team to kick off the district tournament at the Sportsplex in Troy. They did it in fine fashion with a 22-3 win over Eufaula.

“We are very thankful,” said Troy head coach Tommy Jones. “Before the last game and for the last week we have been encouraging the guys to give 110 percent. Everybody did their job tonight.”

Troy sent a total of four pitchers to the mound in the opening round win. Jaxon Wade got the start and he was followed by Jeremiah Davis, Gabe Jones and Wes Bundy.

Troy batted around and then some in the first inning. In all, Troy sent 21 batters to the plate and tallied a total of 16 runs.

Garrett Whitaker, Will Watkins and Bowen Jones each picked up two hits in the frame. Bowen James’ first hit of the inning cleared the fence in right center for a three-run home run to put Troy up 5-0.

At one point in the inning, Troy had 10 straight batters reach safely.

Wade got Troy back in the dugout after shutting down Eufaula 1-2-3 with three strikeouts on 14 pitches.

Troy picked up right where they left off when they scored four runs to go up 20-0. Wes Bundy, Watkins and Kam Johnson all had RBI hits in the inning.

Walks aided Troy in the third inning. They had a total of three walks and a hit batter that led to Troy scoring their 21st and 22nd runs of the game.

Eufaula sent eight batters to the plate in the third and scored their only three runs of the contest.

Troy finished the game with nine hits. Watkins led the way with three hits, while Whitaker, Kam Johnson and Bowen Jones all had two hits.

The Americans will be back in action today when they take on the Troy Nationals beginning at 8 p.m.