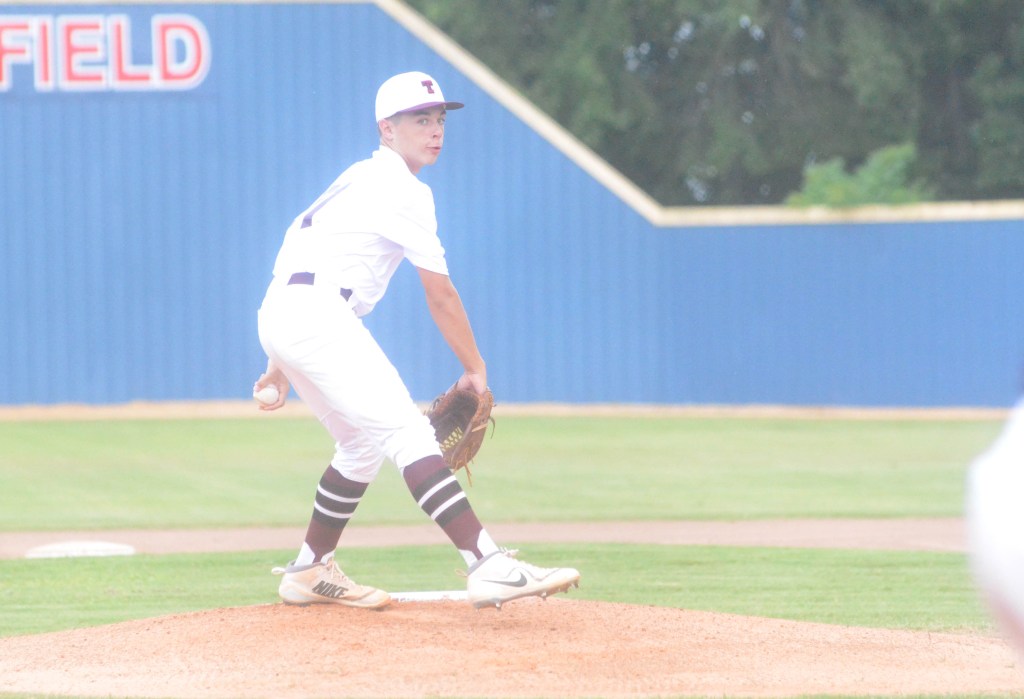 Drew Nelson delivers a pitch for Post 70 on Tuesday night.

One of the challenges facing coach Ross Hixon and the American Legion Post 70 17U baseball team was to gel into a cohesive unit in small amount of time. After an 8-1 start to the season, Hixon believes his team has overcome that obstacle.

The closeness between the Pike Liberal Arts and Charles Henderson players has played a factor early in the season.

“Some guys are talking a little more and getting to know different people on the team,” Hixon said. “You are starting to see that page turn and that’s big.”

Post 70 wrapped up play in the Smartt Baseball tournament on Sunday with their lone loss of the season at the hands of the Northwest Florida Aces 5-3.

“We faced a pretty good team with a pretty good pitcher on Sunday,” Hixon said. “The starter we faced is committed to Florida State, so it was pretty good competition for sure.”

Minus that blip in their schedule, Post 70 has been undefeated on the season.

Chandler Golden of Rehobeth High School threw a no-hitter in Post 70’s win on Saturday to continue his strong start to the season.

“Both outings that he has pitched he has been really good,” Hixon said. “He has had 22 strikeouts and three walks in 12 innings. He certainly has solidified himself as our number one starter.”

Pitching has been a nice surprise for Hixon so far this summer. His staff is pitching to an ERA of just over 1.00.

“We are nine games in at this point and to have an ERA that low as a team is pretty special,” Hixon said. “I would say we have been really good on the mound.”

“Everybody knows about his 16-scoreless innings in the postseason,” Hixon said. “He has carried that over this summer. He has thrown six innings (eight innings after Tuesday’s outing) without giving up a run. The kid is just fun to watch because he competes and he throws strikes.”

Post 70 has also gotten production at the plate from some local talent including Lawson Scarbrough and Chance Pollard of Charles Henderson and from leadoff hitter Cody Hollis of Pike Liberal Arts.

“Cody Hollis is leading our team so far in batting average,” Hixon said. “He has been really good all summer. He is batting .577 and he has 15 hits in 26 at-bats. As an individual, locally, he has probably been the best.”

Post 70 has been able to play in two tournaments so far this season and they feel like they are benefiting from the experience.

“Playing in those tournaments in front of college scouts and coaches in a college stadium like Troy’s kind of helps,” Hixon said. “I think it kind of helps.”

Post 70 will have another local tournament this weekend in the Father’s Day Classic. The Tournament begins on Friday.