DOWN WITH THE DEVILS: Trojans defeat Duke 6-0 in opening game of NCAA Regionals 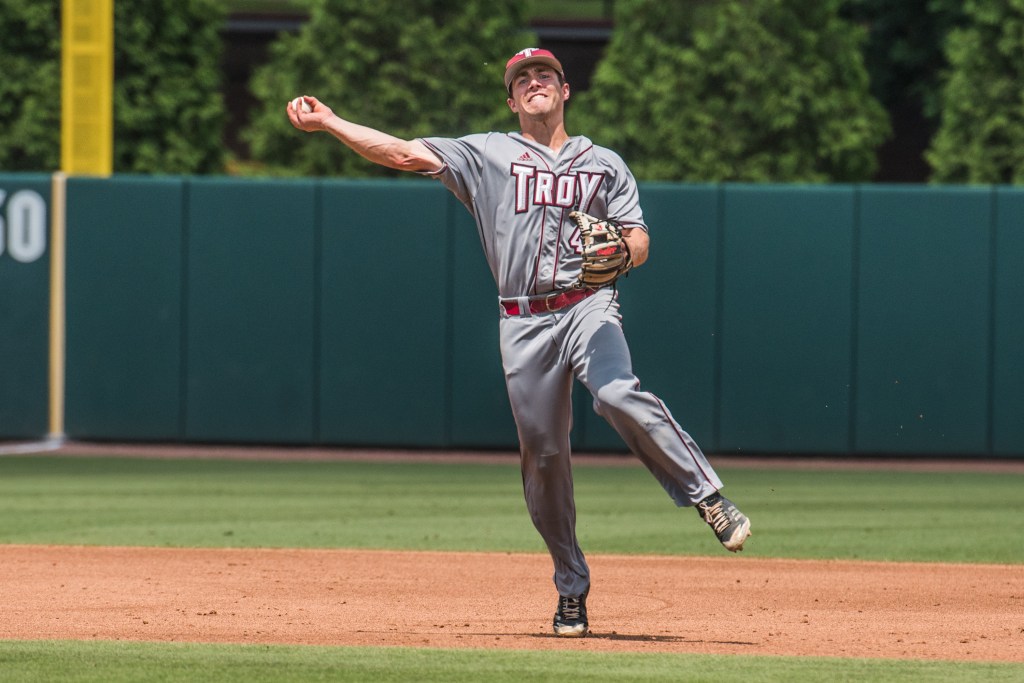 The Troy Trojans jumped out to a 5-0 lead over the No. 18 Duke Blue Devils. After a lengthy delay of five hours and 25 minutes, the Trojans tacked on one more run and took home a 6-0 victory in round one of the Athens Regional.

The win for the Trojans gives them their first regional win since 2013.

“We’re certainly proud of the win,” said Troy head coach Mark Smartt. “In order to have success in this type of format, you have to start 1-0. I’m really proud to get off that good start.”

Senior Andrew Crane got the start for the Trojans and went three scoreless innings while only allowing four hits.

Corey Childress took the Trojans the final six innings. The senior didn’t allow a run on just one hit while striking out a career-high nine batters.

“I gave the ball to Corey Childress with zero notice,” Smartt said. “As good as he has thrown in his four-year career – and Corey has been really good for us all throughout his career – today, he was special.”

The Blue Devils had the first big threat of the game in the second inning. Two of the first three batters reached on singles to put runners on the corner with just one out. Crane picked up back-to-back strikeouts to end the threat.

“That’s what Andrew does,” Smartt said. “His legacy for Troy will be he just doesn’t give up runs. When guys get into scoring position, he goes to another gear. His stuff is elevated and his competition goes to a level that is hard to get to.”

The Trojans put runners of their own on base in the top of the third. In fact, the Trojans sent nine batters to the plate. Manning Early, Matt Sanders and Drew Frederic all reached safely with one out in the inning. Joey Denison sent all three of them home with a double that landed between the center and right fielders to give Troy a 3-0 lead.

“We had talked all week about getting off to a good start,” Denison said. “That at-bat, there was a runner on third with less than two outs so really I was just trying to score the runner from third and get a good ball in the air. Luckily, it found a gap and three were able to score.”

Brody Binder had the Trojans’ third extra base hit of the inning to drive in Denison, extending Troy’s lead to 4-0.

Following Crane’s escape act, the Trojans tagged the Blue Devil pitching staff with another run in the fourth when Denison picked up his four RBI in two innings scoring Early to put Troy up 5-0.

Crane came out to the mound to warm up in the bottom half of the inning, but was forced to exit the game due to cramping.

Childress came into the pitch, but before he did, he got a message from Crane.

“He told me to go right after them,” Childress said. “He said go out there, we have the lead, do what you do and go after them. I followed with what Andrew was doing and attacked hitters.”

The senior shut down the Blue Devil offense 1-2-3 on just five pitches during his first inning of work.

The Bulldogs elected to bring in Hunter Davis following the delay. The seldom-used pitcher allowed a Sanders Double and, after two walks, Mosley grounded into a fielder’s choice to give the Trojans a 6-0 lead.

The Trojans finished the game with nine hits. Sanders finished 3-5 at the plate, while Denison went 2-4 with 4 RBI. Early also finished with two hits.

The Trojans will be back in action today when they take on the winner of Campbell at Georgia beginning at 7 p.m. CT.