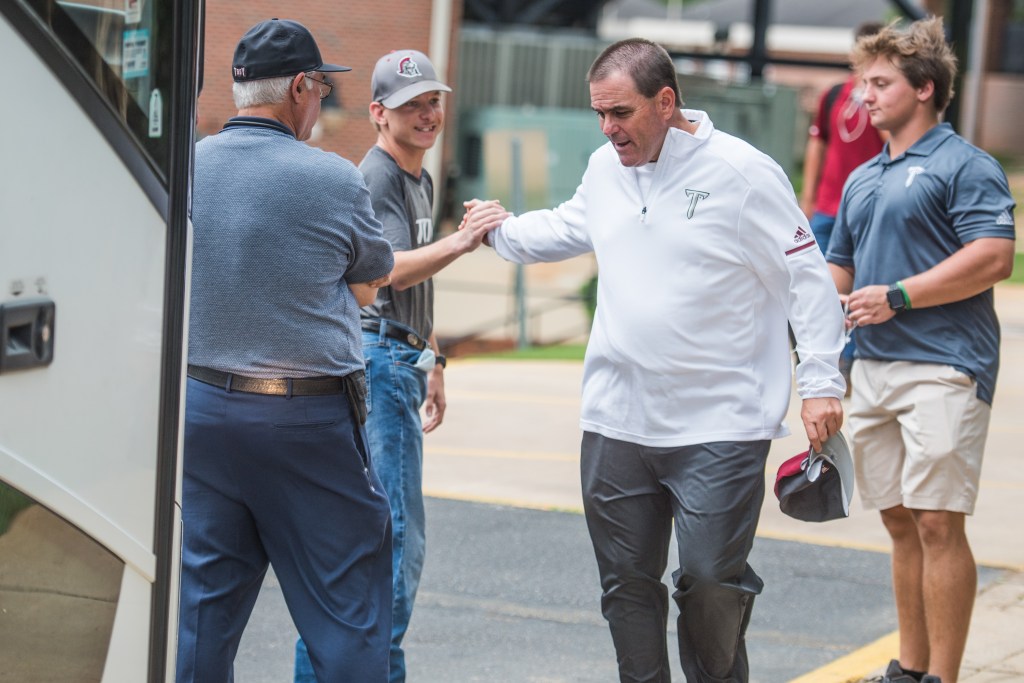 It was a dark and gloomy Wednesday afternoon, but that didn’t dampen the excitement of the Troy players as they loaded the bus for their trip to Athens for the start of the NCAA Tournament.

The Trojans, along with Duke, Campbell and host Georgia, will all participate in the Athens Regional beginning on Friday afternoon when the Trojans take on the Blue Devils.

“I’m excited about the opportunity that our team created,” said head coach Mark Smartt. “I am really happy for the players and the coaches that put so much into this. It’s a lot of time, effort and commitment. I am really proud of that. I thought our team deserved this.”

The players loaded the buses with excitement. The plan for Smartt and the Trojans is to keep this like any other road trip.

“That’s been the plan,” Smartt said. “This is a little bit of a different stage. I don’t think our team will react differently, but you never quite know until you get into that moment.”

This will not be the first time the Trojans visited a “Power 5” school. They made trips to Auburn, Florida State and Alabama. They also played Mississippi State at the Hoover Met in Birmingham.

“I do think our schedule helped prepare us for this opportunity,” Smartt said. “We played in some bigger venues, we played in front of big crowds, so I am hopeful with that experience that they can relate to that and go play a good game of baseball without adding all the other things to it.”

The Trojans were hoping to get on the field as much as possible to get some work in before departing. With gaps in the weather, they were able to do just that.

“We had a really good workout on Tuesday,” Smartt said. “Fully extended, no issues at all. We had a quick workout this morning (Wednesday) without any issues. We did get two solid days in. We will get a nice work day (Thursday) on the field to get familiar with the layout there.”

Everybody close to the program hopes the Trojans will shock the college baseball landscape with a region title.  Coach Smartt hopes his program will play well enough to make the university and the community proud.

“It’s really important to go play well,” Smartt said. “It will be great to get deep into the tournament with a chance to win. Every game is going to be unique and challenging. Duke is really good, Georgia is really good and Campbell is really good. Everyone in this tournament is coming in playing well for an extended period or they are hot.

Pike Liberal Arts Alum Rush Hixon grew up in the Troy area and knows what success in this tournament would mean for the community.

“It would be huge,” Hixon said. “This is a baseball town. We win championships in 8U, 10U all the way up through high school. Now you have the college competing for a national championship so it would mean a ton to not only this program and this university, but everybody involved in the city.”

“This is has been a long journey since August,” Denison said. “It’s been our goal to be able to play on June 1. Now that we are here we can’t be complacent and not go out there with something to prove in the regional. We are still going and trying to win games.”

The Trojans and Duke Blue Devils will start the tournament with first pitch coming at 1 p.m. on Friday.