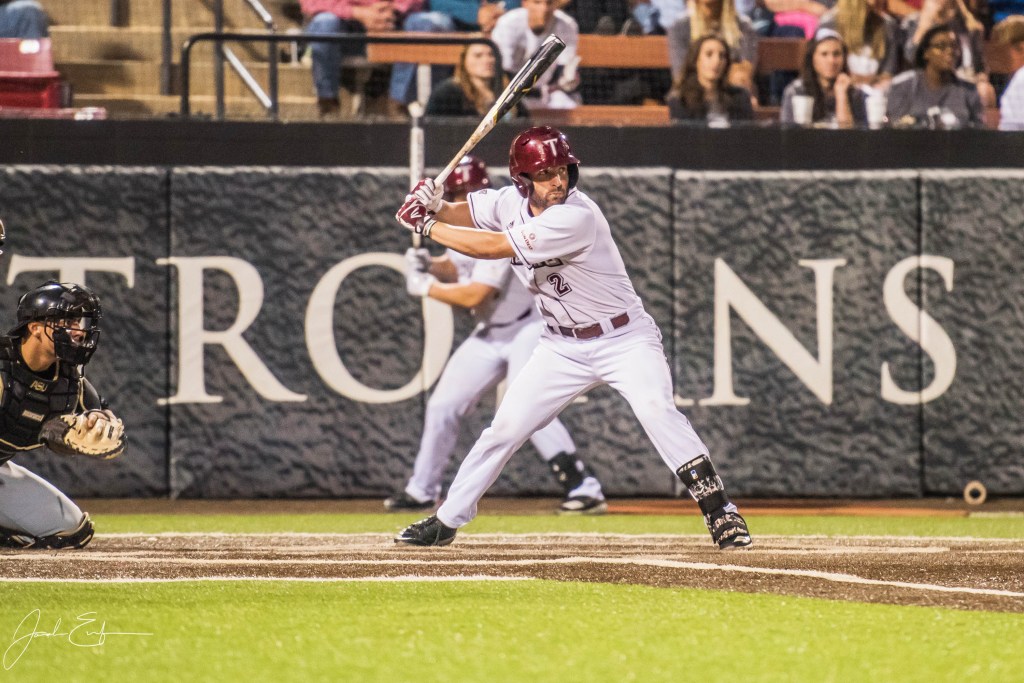 Troy catcher Chase Smartt stands in the batter’s box in a game against Alabama State earlier this season.

The Trojans will take on Duke to begin the four-team double-elimination tournament on the campus of the University of Georgia.

“It’s a great thing for the University as a whole,” said senior left fielder Joey Denison. “It’s great for the baseball program. It’s great for this team to pit itself in the history books. We are going to be able to look back at this team and be able to think of it as one of the best Troy teams that has come through here.”

Denison has been on the forefront of Troy’s success this season. The senior garnered Sun Belt Conference Player of the Year honors after finishing the season with a .387 batting average with 33 extra base hits including 26 doubles. He finished the season with a conference-high 74 RBI. He picked up at least one RBI in all but 18 games this season.

Denison’s 26 doubles helped the Trojans offense accumulate 124 doubles this season, which puts them in a tie for 10th most in the country.

Denison was named to the 2018 Collegiate Baseball All-American Second Team on Thursday.

“I don’t think it was anything individual for any of our players,” Denison said. “I think it was 1-9, or 1-10. Sometimes we had different guys hitting in different situations. We had everybody picking up the slack whenever it needed to be done. It hasn’t come from one or two players, it has come from all of the players.”

The Trojans currently have six players in their everyday lineup that are batting over .300.

“We just have to keep doing what we have been doing,” said Trojan leadoff hitter Matt Sanders. “It got us this far. We just have to relax and play like we can.”

Sanders finished second on the team with a .379 batting average with 26 extra base hits and 28 RBI. He also stole 26 bases.

Base-running has been an added bonus for the Trojans this season. When they have gotten on, they have wreaked havoc on the bases. They have stolen 114 bases in 60 games this season, an average of almost two per game. The Trojans had three players finish with over 20 stolen bases, led by Drew Frederic’s 28.

Frederic not only got things done on the bases, he hit .329 and racked up a second-best 49 runs in 2018. Frederic, for his efforts, garnered All-Sun Belt Second Team honors. Frederic was one of five players to pick up all-conference honors along with pitcher Andrew Crane, Frederic, Denison, Sanders and Rigsby Mosley.

Mosley won the Sun Belt Conference Freshman of the Year award after he batted .330 with five home runs and 47 RBI.

The Trojans and Blue Devils will begin play on Friday beginning at 1 p.m. (CT)