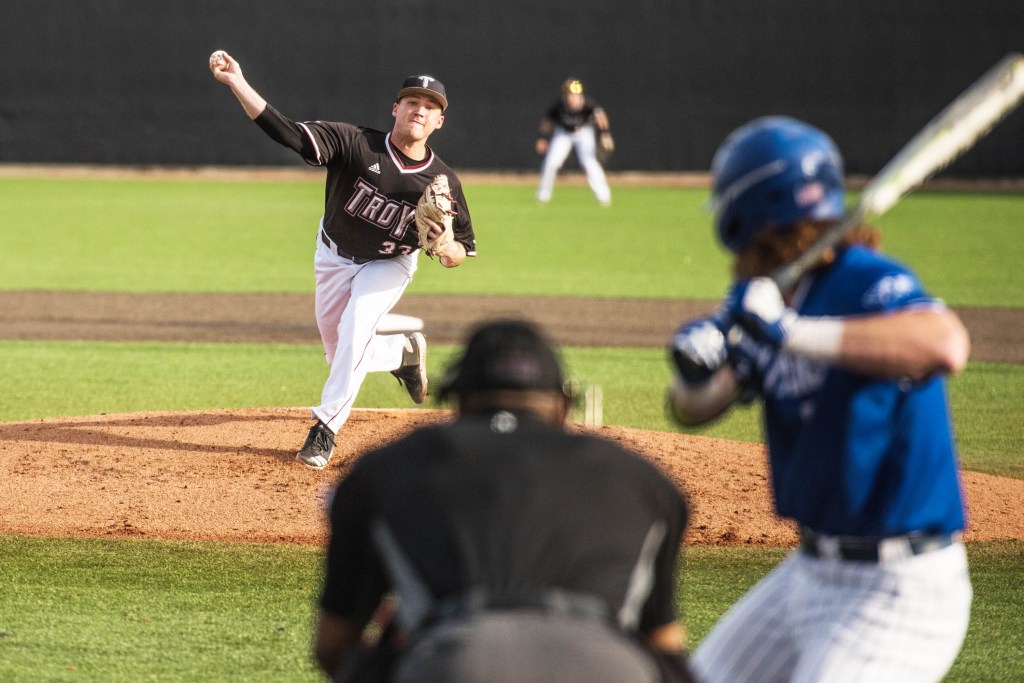 photo/Jonah Enfinger The Trojans begin play in the NCAA Tournament this Friday.

The Troy Trojans pitching staff had a strong showing at the Sun Belt Conference Tournament last week. They hope that trend continues when they head to Athens Regional to begin the NCAA Tournament.

“We are pitching really great,” said senior pitcher Daren Osby. “The pitching has been outstanding all year. Whoever is going on the mound, I am very confident. It doesn’t matter if it’s our number one in {Andrew} Crane or whoever it may be, I am really confident in each pitcher that we put out there.”

Add the pitcher’s success to the potency of the lineup and the Trojans are feeling good heading to Athens.

Both Crane and Osby found success on the hill in Lafayette last week. Osby pitched the Trojans into the conference championship on Saturday when he pitched 8 innings against Texas State and allowed just two hits while striking out eight batters.

Crane pitched the Trojans to their second win of the tournament on Friday against Louisiana. The senior also pitched eight innings and allowed one run on four hits. Crane struck out 10 batters.

Crane showed a lot of emotion on the mound. He was regularly seen getting excited with each strikeout. This is the part of the season that Crane enjoys most of all

Because of the success of the starting pitchers, the bullpen didn’t get much work in through the first three games. In the championship game, head coach Mark Smartt elected to have a bullpen game and start closer CJ Carter. Carter pitched just three innings and allowed four runs. Carter was followed on the mound by Jackson Cofer, Corey Childress, Zack Lightsey and Max Newton. In all, the Trojan pitchers allowed 11 runs on 11 hits.

“A rusted bullpen was a great luxury, but none of those guys were at their best or sharp,” Smartt said. “It has been a while since they had been in a game. So, as I thought that would be an advantage for our team, I am not sure if it played out that way. Unfortunately, we didn’t pitch well enough to win the game.”

The Trojans will get the pitchers some work in the bullpen this week leading up to game one of the regionals.

“We will try to rectify that this week with our work leading into the event,” Smartt said. “We are going to have our hands full the next two or three days trying to get practice in with this weather system we are dealing with. Hopefully we will get some gaps and some opportunities to get on the field and get better.”

The Trojans will begin play in the Athens Region at 1 p.m. (CT) on Friday.