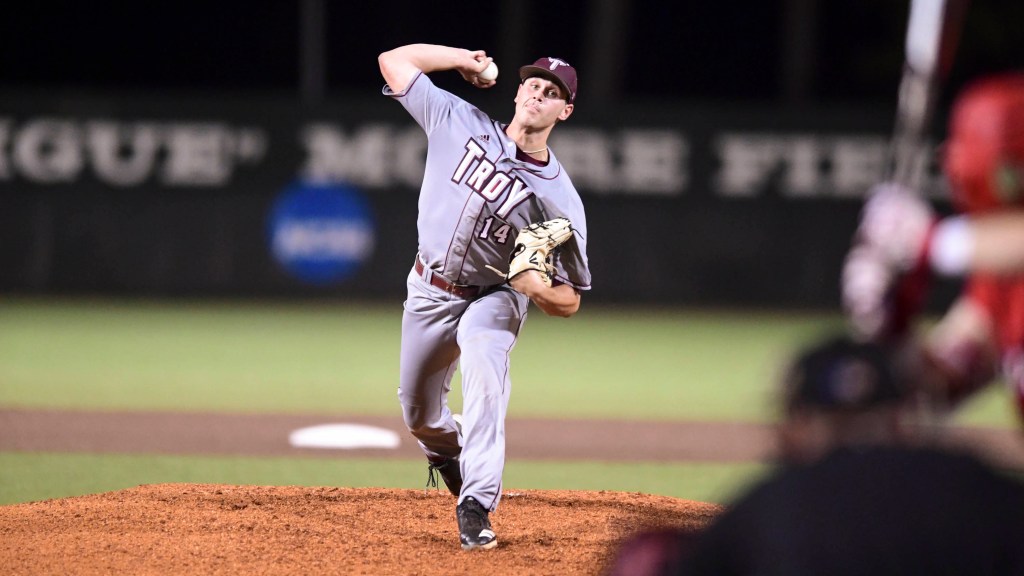 Photo By Buffy Massey Andrew Crane delivers a pitch for Troy during a game against Louisiana on Thursday evening in Sun Belt Conference Tournament in Lafayette Louisiana.

The Troy Trojans and Louisiana didn’t start until after 10:40 on Thursday evening, but the wait was more than worth it for the Trojans after they defeated the Ragin’ Cajuns 10-1 on day two of the Sun Belt Conference Tournament.

“I’m certainly proud of the win,” said Troy head coach Mark Smartt. “It was convincing and we broke it open late. Andrew Crane was the story of the game, he was really good again. When we got the three runs in the fifth, he turned the competition level way up. Our offense was good.”

Day two featured four games, plus a resumption of the final game of Wednesday’s schedule. By the time the first pitch was thrown, it was over three hours behind schedule.

“Our kids wanted to play so desperately,” Smartt said. “Nobody wants to play this late into the night. The fans get robbed of some of the opportunities to watch and the fans back at home probably didn’t listen to the radio or watch TV. Win or lose, I thought it was the right call. The tournament stays on path. I thought the committee did a good job at forcing the action.”

Senior Andrew Crane got the start and the win for the Trojans. The senior pitched eight innings and allowed one run on four hits. He struck out 10 Cajun batters.

Sadler Goodwin led the Trojans at the plate after he went 2-4 while driving in six of the Trojans’ 10 runs. Brandon Lockridge also had a multi-hit game, going 3-6 with a run driven in.

With the game tied at one heading into the fifth inning, Binder picked up two of his six RBI with a two-run triple to right center to put the Trojans up 4-1.

After Lockridge extended the Trojans’ lead to 5-1, Goodwin broke the game wide open with a grand slam to left field to put the Trojans up 9-1.

The win for the Trojans secured them a day off on Friday. They will play the winner of Louisiana and Texas State this Saturday beginning at 12:30.

The Trojans opened the tournament by beating the Bobcats 5-1 on Wednesday.