WORK OF PASSION: Schrieber sees policing as more than a job 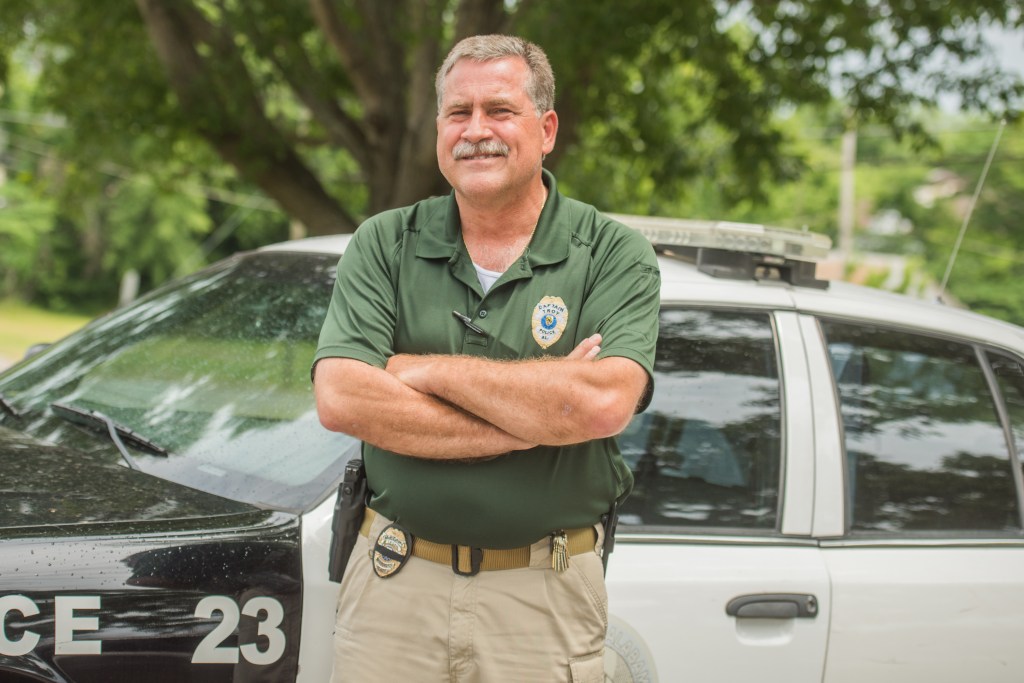 Sonny Schrieber sees police work as more than a typical 9 to 5 job, but more as a position to be “Passion” is the word that Schrieber used to describe his time at the Troy Police Department. Schrieber joined the police force in the summer of 1983 as a dispatcher and a jailer. 35 years later, Schrieber has climbed his way up the ladder to captain.

“I worked my way up to patrol and eventually made patrol sergeant,” Schrieber said. “From there I got promoted to detective sergeant. From Detective Sergeant to Detective Lieutenant. I was finally promoted to captain of the Detective Division.”

“It’s my life,” Schrieber said. “It’s in my blood. It’s what I am made of. I guess it is what I was made for. I don’t have a college background and I got lucky and fell into this through a friend. I had no idea what I was going to do with my life, honestly, and this is where I wound up and I love every minute of it even to this day.”

Schrieber has the opportunity to help and engage with the community on a daily basis. Whether it’s helping people with missing lawn equipment to a major crime, helping people gives the detective the biggest thrill.

“It’s just about helping people,” Schrieber said. “If somebody comes to your house and steals a weed eater out of your garage, to the police department as a whole it’s not high on the priority list, but to you it’s a big deal. Even though, on the priority list for the police department it’s not a big deal, there is satisfaction and closure and there is something very satisfying with that.”

It means even more when somebody is a victim of a major crime, he said.

“It doesn’t matter what it is,” Schrieber said. “Whether a person writes a bad check or there is a murder, to be able to give somebody closure and justice is a good feeling.”

When he was a patrolman, Schrieber was able to help a certain family and from that a relationship grew. Schrieber was called to a scene where a young girl was locked in a bathroom while bathing. After arriving on scene Schrieber was successfully able to get the door open allowing the mother to reach the unharmed child.

“The baby was still playing in the tub, oblivious to what had happened,” Schrieber said. “I left and didn’t’ think anything about it. Fast forward to about four or five years ago and I was somewhere and a young lady walked up to me and said ‘Hey Mr. Sonny, how are you doing.’ I didn’t know who she was. She asked me ‘You don’t know who I am, do you?’ She said ‘You saved my life when I was a baby.’

“All her life, every time they went down the road, her and her mom would see me at work and her mama would point me out to her. It was an event that I didn’t think much about, but obviously 20-25 years later this was a big event for them. What more could you ask for.”

During all the work in the field, Schrieber has enjoyed the relationships he has forged with the people that he meets.

“You develop a personal relationship and you become friends with these victims,” Schrieber said. “You realize they are just average Joes sitting at home and minding their own business when all hell breaks loose.

“You get to know a lot of people in this business, sometimes in negative ways, but sometimes you can turn a negative into a positive and you can make a life-long friend. That’s what it’s all about to me.”

Schrieber has seen many changes to the city of Troy throughout his 35 years on the force. He has also seen the job change as well. Whether it be the technology or the times we are living in, he has had to adjust.

“I am excited for Troy’s growth, but at the same time Troy has been able to keep the hometown feel,” Schrieber said. “Everyone knows everybody and everybody does a good job getting along. “Technology and people have changed. We are dealing with people now that are raised differently than when I was raised. You have to adapt to that. Everyone has a cellphone, everybody has a camera and everybody has a video camera. You have to adapt to that. Does it really change anything as far as what you do or how you do things? If you do your job right you have nothing to worry about.”
Communication and how to react to certain situations is one area police have to be efficient in while on the job.

Schrieber believes a lot of people don’t know how dedicated officers are.

“I think they don’t realize the passion that police officers have for this job,” Schrieber said. “It’s not for their own benefit, it’s the passion of serving others. I just don’t think a lot of people realize that. When you get into this profession … it becomes a passion and something that is inside you.”